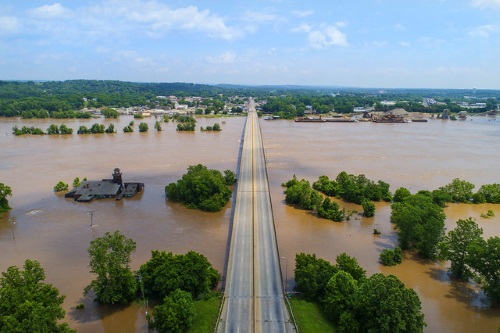 As state departments of transportation across the central United States continue to struggle with roadways waterlogged by heavy flooding, President Trump’s administration continued to approve declarations of disaster to authorize federal funding to supplement state, tribal, and local recovery efforts.

[Above photo by the Arkansas Department of Transportation.]

“The news of incoming federal disaster relief is welcome after an exceptionally difficult transition from winter to spring this past year,” noted Minnesota Gov. Tim Walz (D) in a June 12 statement. “Minnesota is on the road to recovery, and the assistance granted by this declaration will expedite that process enormously.”

He added that “major flooding, blizzard conditions and gale-force winds” have combined over the last several weeks to cause nearly $40 million dollars in infrastructure damage across the state.

Arkansas Gov. Asa Hutchinson (R) reported in a statement on June 7 that his state is expecting even higher damage totals.

“The cost of recovery from the storms and flooding since May 21 is beyond the capacity of the state and local governments [and] we won’t know the full extent of the loss until the water recedes,” he emphasized. “Early estimates show that nearly 900 homes in eight counties sustained major damage or have been destroyed [and] we are estimating that our losses will exceed $100 million in terms of public damage.”

North Dakota Gov. Doug Burgum (R) added in a June 12 statement that “unprecedented flooding” near the confluence of the Yellowstone and Missouri rivers in McKenzie County forced evacuations and prevented 110 displaced residents from returning to their homes for several days. At least eight homes were destroyed and 12 sustained major damage, he noted.

“Preliminary damage assessments indicated that flood damage was expected to exceed nearly $8.5 million,” the governor added. “It’s estimated an additional $2 million could be eligible when final assessments are completed.”

Gov. Burgum pointed out that flood-related costs compounded the financial burden faced by local and tribal jurisdictions whose snow removal and emergency fund budgets were depleted by record or near-record snowfall in February and March, with season totals of 90 to 100 inches of snow in many areas – double the normal amount.