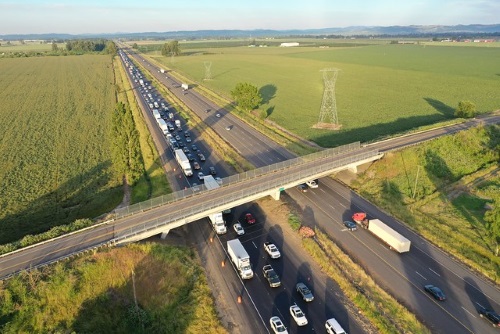 Concern over the drastic depletion of the Highway Trust Fund became a key topic of discussion during a June 12 hearing held by the House of Representatives’ Transportation & Infrastructure Subcommittee on Highways and Transit.

“The Highway Trust Fund – the primary source of federal revenue for highway projects, safety programs, and transit investments – is projected to run short of the funds necessary to maintain current spending levels by Fiscal Year 2021,” noted Chris Spear, president and CEO of the American Trucking Associations trade group, in his written testimony during the three and half hour hearing entitled “Under Pressure: The State of Trucking in America.”

“While an average of approximately $42 billion per year is expected to be collected from highway users over the next decade, nearly $60 billion will be required annually to prevent significant reductions in federal aid for critical projects and programs,” he explained.

For that reason, his organization supports the creation of what Spears called the “Build America Fund,” which would collect a new 20-cent per gallon fee built into the price of transportation fuels at terminal rack to be phased in over four years, along with a new fee on hybrid and electric vehicles.

“The [fuel] fee will be indexed to both inflation and improvements in fuel efficiency, with a five percent annual cap,” Spears said. “We estimate that the fee will generate nearly $340 billion over the first 10 years.”

He added that the BAF monies would initially fund existing HTF programs, with $5 billion eventually set aside to fund a National Priorities Program to address “congestion bottlenecks” on the national highway system.

“While the cost and scale of addressing highway improvement needs is daunting, it is important to note that much of the congestion is focused at a relatively small number of locations,” Spears emphasized. “Just 17 percent of NHS miles represents 87 percent of total truck congestion costs nationwide.”

Jason Craig, director of government affairs for freight conglomerate C. H. Robinson, added in his written testimony that “outdated and poorly designed infrastructure is a safety risk to all,” which is why his firm “wholeheartedly supports a robust investment in the nation’s freight roadways that will also improve safety and reduce truck crashes.”

Rep. Rodney Davis, R-Ill., the highways and transit subcommittee’s ranking member, noted in his remarks that Congress is “continuing to ramp up” efforts to reauthorize federal surface transportation programs and policies in part to “facilitate the safe and efficient movement” of freight.

“But we are not only responsible for improving the surface transportation system that facilitates freight movement to domestic and international markets; we are also responsible for the safety of the users of that system and the regulatory environment that the trucking industry operates in,” he explained. “Each of these responsibilities must be considered in a comprehensive manner.”