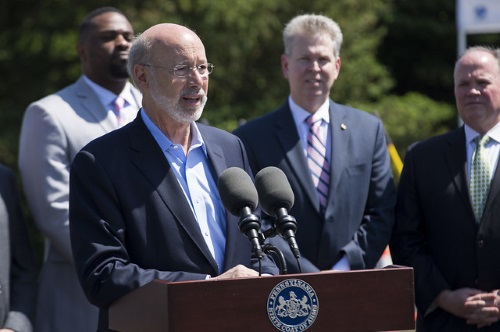 On the heels of the introduction of legislation to support a four-year, $4.5 billion infrastructure spending plan called “Restore Pennsylvania,” Governor Tom Wolf (D) (seen above) highlighted the release of several white papers that highlight the plan’s potential economic benefits – especially where transportation is concerned.

“Over the last six months I’ve been traveling across Pennsylvania visiting communities with infrastructure investment needs. Many of these communities were boroughs in need of assistance with expanding broadband, removing blight, and cleaning up contaminants,” the governor said during a June 11 address at the Pennsylvania State Association of Boroughs Annual Conference.

“Infrastructure issues like this are why I’ve proposed Restore Pennsylvania to help communities of all sizes, including boroughs, modernize and move ahead, making Pennsylvania a leader in the 21st century economy,” Gov. Wolf added.

According to a transportation white paper issued by the governor’s office, two of the roadway components of the “Restore Pennsylvania” plan include expanding the Multimodal Transportation Fund by adding a competitive grant program to spur construction, reconstruction, or maintenance of roads and bridges owned or maintained by a county, municipality, person, association or corporation, other than highways or bridges owned, controlled or maintained by the Pennsylvania Department of Transportation or any tolling authority.

The plan would also create a new program within PennDOT to fund the maintenance of secondary routes in rural counties, which are defined as counties with a population not exceeding 150,000.