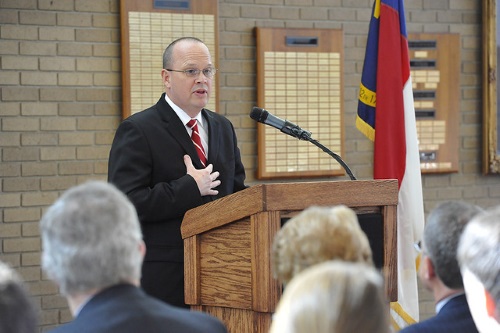 The American Association of State Highway and Transportation Officials has appointed James Trogdon III (seen above) – secretary of North Carolina Department of Transportation – to a two-year term as chair of the Council on Rail Transportation.

Trogdon, appointed secretary of the North Carolina DOT in January 2017, is a registered professional engineer with more than 30 years of experience in the transportation industry alongside three decades of military service with the North Carolina National Guard.

He joined the North Carolina DOT in 1985 as a highway engineer, working with the North Carolina General Assembly as director of strategic transportation planning and serving as chief operating officer for four years before retiring from the agency in 2013.

Trogdon subsequently held several private sector positions after retiring from the North Carolina DOT, including national transportation director for SAS Institute, before being appointed transportation secretary over two years ago.

His military career includes serving as the plans officer for road and school construction in Honduras and Ecuador along with deployment in 2006 during Operation Iraqi Freedom to command two engineer battalions in northern Iraq. Trogdon retired from the military in 2016 with the rank of Major General after serving as the Deputy Adjutant General for the North Carolina National Guard.

March 8, 1887: The Passing of “Captain Eads,” a Renowned Inventor and Civil Engineer

James Buchanan Eads, an internationally renowned inventor and civil engineer, died at the age of 66 while vacationing in the Bahamas. Eads had been born in Lawrenceburg, Indiana, in 1820. He was named after his mother’s cousin James Buchanan, who was a U.S. congressman at the time and would go on to become the 15th president.