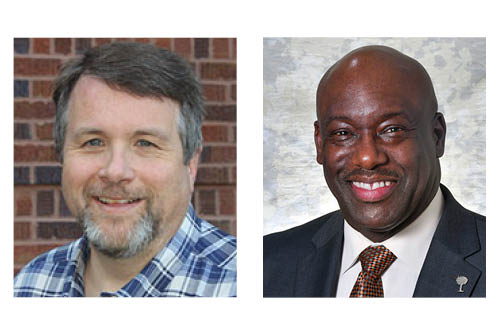 The American Association of State Highway and Transportation Officials recently made appointments to its Committee on Human Resources and Committee on Civil Rights.

The organization re-appointed Lee Wilkinson (above left), director of the operations and finance division at the Iowa Department of Transportation, to a new two-year term as chair of the Committee on Human Resources, which researches, recommends, and shares best practices and policy initiatives to enable the human resource functions at state transportation agencies to keep getting stronger, innovative, and more efficient.

Wilkinson – a graduate of the University of Northern Iowa with a degree in public administration – joined the Iowa DOT in 1996 and was named director of the agency’s operations and finance division in December 2006.

AASHTO also named Greg Davis (above right) – director of minority and small business affairs for the South Carolina Department of Transportation – to a two-year term as chair of the organization’s Committee on Civil Rights, which follows his recently-completed one-year term as the committee’s vice chair.

Davis – who holds degrees from the University of South Carolina and a Native American business certification from the Tuck School of Business at Dartmouth College – joined the SCDOT after serving as small business development manager for the South Carolina Department of Commerce and project director for the Minority Business Development Agency of S.C.; a division of the U.S. Department of Commerce.