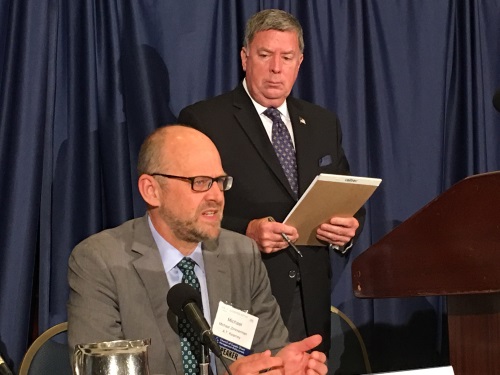 A boom in U.S. freight activity is highlighting the need for transportation infrastructure investments, according to the 30th annual “State of Logistics” report compiled by consulting firm A.T. Kearney with the support of the Council of Supply Chain Management Professionals and Penske Logistics.

Michael Zimmerman, a partner with A.T. Kearney and principal author of the report, chaired a panel discussion at the National Press Club in Washington D.C. on June 18 to discuss its major findings: namely that – amid a “booming” economy – U.S. business logistics costs increased 11.4 percent in 2018 to $1.64 trillion, representing 8 percent of the nation’s $20.5 trillion gross domestic product.

Yet he noted that the “absence of a major infrastructure investment initiative will be a drag on the logistics industry.” Specifically, Zimmerman (at right) pointed to 2017 American Society of Civil Engineer data that indicated the U.S. surface transport system needs more than $2 trillion to close what ASCE calls an “infrastructure funding gap” – money unlikely to be spent following the cessation of infrastructure funding talks between President Trump and Democrat Party leadership in late May.

“An infrastructure deal seems unlikely to materialize now.” Zimmerman explained. “But it is critical to logistics and supply chain activity.”

Derek Leathers, president and CEO of trucking conglomerate Werner Enterprises and part of the panel discussing the importance of logistics activity on the U.S. economy, added that “infrastructure is an investment, not an expense” when it comes to freight transportation.

“We cannot afford not to invest; we cannot afford to sit idle and do nothing,” Leathers (at right in photo at left) emphasized. “If your roof is leaking, you fix the roof, because there will be damage to your house if you don’t do so. That’s why to me it is short-sighted that we don’t invest in [transportation] infrastructure; it also means we’ll end up spending more on it as time goes on.”

Kevin Braunbach, vice president of inbound transportation for Walmart’s supply chain division, added that investing in infrastructure should be an issue with “bipartisan support” but it’s one where few fully realize the potential economic benefits such investment brings.

“The U.S. has a huge competitive advantage with its highway system, for example,” he said.

Zimmerman added in this year’s “State of Logistics” report that “climate change-related” natural disasters – particularly the recent spate of hurricanes, wildfires, and flooding – are “posing increasing risks” to economic growth and to the logistics industry.

“The March 2019 Midwestern floods created significant disruptions and suspended service on Union Pacific and BNSF rail networks … and were so widespread that re-routing capabilities were limited,” he said.

In terms of wildfires, the late 2018 “Camp Fire” in northern California “occurred in a region that had recently undergone a construction boom for logistics and warehousing infrastructure to support the fast-growing e-commerce industry,” Zimmerman noted.

As a result, “all logistics players must therefore anticipate more extreme weather-related disruptions in 2019 and beyond … planning ahead for added costs.”