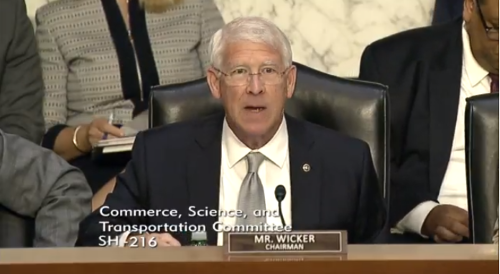 “There is much to discuss as we assess the safety and reliability of our nation’s transportation system and prepare for reauthorization of the FAST Act and the future of surface transportation,” noted Sen. Roger Wicker, R-Miss., the committee’s chairman, in his opening remarks.

Two other issues that impact state departments of transportation – preserving the 5.9 GHz spectrum for transportation safety purposes, along with accelerating and improving the project delivery process – were touched on as well.

USDOT’s Szabat said in his remarks that “the 5.9 GHz band of radio-spectrum or ‘Safety Band’ is of critical importance to the department for reducing crashes, injuries, and fatalities, while mitigating congestion,” and that “it is uniquely positioned today to support safety applications that could prevent or significantly reduce the severity of vehicle crashes in a manner not available through other existing vehicle technologies.”

He emphasized that USDOT “must ensure that use of the Safety Band is protected” for traffic safety so that automated light duty vehicles, trucks, motor coaches, rail, transit, and infrastructure and traffic devices across all surface modes can work in the safest possible way. “Doing so can help reduce the annual number of 37,000 road deaths and 2.7 million injuries,” he explained.

In addition, Szabat said that delivering transportation projects through the environmental review process “more quickly and efficiently” remains a key goal for USDOT.

“[USDOT] implemented all project delivery rules required by the Moving Ahead for Progress in the 21st Century or MAP-21 Act and the FAST Act, except for a pending final rule implementing the FAST Act pilot to authorize states with National Environmental Policy Act assignment to substitute state environmental laws and regulations for NEPA,” he explained.

“Currently, the environmental review process can be complex, inconsistent, and difficult for project sponsors to navigate,” Szabat noted. “Protection of the environment and safeguarding of our communities is of critical importance, and can be achieved more effectively, thereby resulting in reducing project delays and costs, and realizing benefits of critical infrastructure projects sooner.”