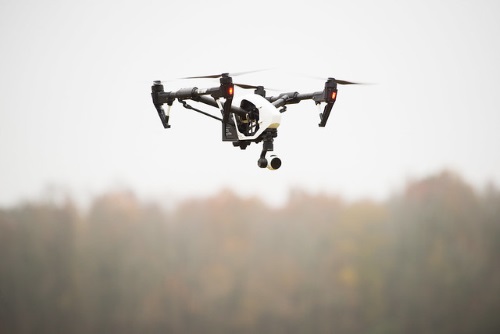 Rapid advances in unmanned aerial systems or UAS technology – commonly known as drones – promise to “revolutionize air transportation” yet simultaneously pose “significant risks” via “negligent, reckless, or malicious use,” according to testimony provided during a June 18 Senate subcommittee hearing.

[Above photo by the North Carolina DOT.]

Witnesses before the Committee on Commerce, Science, and Transportation’s subcommittee on security – chaired by Sen. Dan Sullivan, R-Alaska – noted that the UAS industry and the ever-evolving UAS technological landscape “have outpaced the current laws and policies designed to prevent harmful interaction between manned and remotely piloted aircraft” and recommend that Congress “take additional steps that will empower state and local partners to take charge of their own safety” when it comes to drone operation oversight.

“The Preventing Emerging Threats Act of 2018 authorized some federal agencies to take action to intercept and neutralize UAS [drones] that pose a threat to safety; however, they lack the capability to provide robust and persistent coverage across the nation,” noted Harold Shaw, chief security officer for the Massachusetts Port Authority, in his written testimony.

“State and local agencies are ready to fill this void, but we need greater legal authority to do so,” he added. “We respectfully request Congress pass additional legislation that extends similar authority to state and local law enforcement agencies.”

[Meanwhile, state departments of transportation continue working on ways to integrate drones safely into their daily operations, as illustrated by the drone demonstration and roundtable discussion forum held during the American Association of State Highway and Transportation Officials 2019 Spring Meeting in Park City, UT, in May.]

The need for expanding state and local oversight of drone operations is also due to the rapidly growing size of the drone population.

Angela Stubblefield, deputy associate administrator with the Office of Security and Hazardous Materials at the Federal Aviation Administration, noted in her testimony that the volume of UAS operations is “outpacing manned aircraft” and there are currently nearly four times as many UAS as registered manned aircraft.

“UAS are used every day to inspect infrastructure, provide emergency response support, survey agriculture, conduct geological and environmental surveys, and to go places that are otherwise dangerous for people or other vehicles,” she explained.

“Entrepreneurs around the world are exploring innovative ways to use UAS in their commercial activities [thus] the need for us to fully integrate this technology into the National Airspace System in a safe, secure, and efficient manner continues to be a national priority—one in which both the FAA and our security partners are heavily invested,” Stubblefield emphasized.

Separately, Sen. Roger Wicker, R-Miss., the commerce committee’s chairman, is seeking to ensure that the benefits of expanded drone use noted by Stubblefield are “equally distributed” between rural and urban communities alike.

To that end, he and Sen. Gary Peters, D-Mich., sent a letter to the FAA on June 19 urging the agency to include representatives from “rural America” on its Drone Advisory Committee.