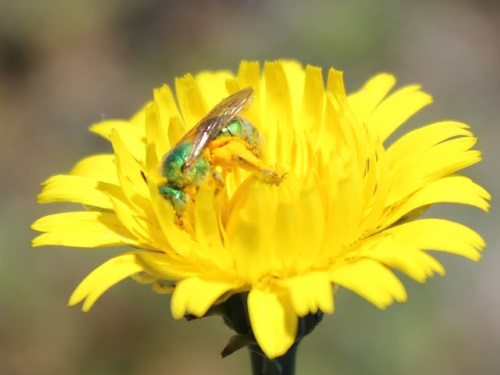 Twelve years ago, the U.S. Senate officially created National Pollinator Week as a way to focus on supporting the species of ants, butterflies, beetles and other wildlife that are responsible for helping pollinate more than 80 percent of the world’s flowering plants.

To that end, state departments of transportation highlighted their efforts to support pollination, often by changing their plant management practices along roadways under their care.

The Washington State Department of Transportation highlighted one such effort taking place near the Scatter Creek Rest Area on I-5 north of Centralia; an effort that is part of its integrated vegetation management program.

In a June 17 blog post, the WSDOT said it planted 39 species of native plants in three seed mixes, with species overlap among the mixes, last September at that Scatter Creek Rest Area – a mix designed to test which types of seeds are best at creating pollinator-friendly plant cover along roadsides and at construction sites.

Despite a relatively cold spring in 2019, followed by an unusual warm and dry period in April, by late May, at least 10 species of plants had germinated from the seed mixes. Within 29 test plots at the rest area, WSDOT identified 35 plants in total, including 10 native plant species from the seed mixes, which indicates there are still many seeds remaining from prior plants despite the agency’s efforts to remove them.

“This is important work that our team is doing,” noted Ann Briggs, a communications specialist with WSDOT. “Evaluating this and other areas will take some time but we’re committed to helping encourage healthy ecosystems for pollinators as part of our roadside management program. We will continue to measure both plant and pollinator activity throughout the summer.”