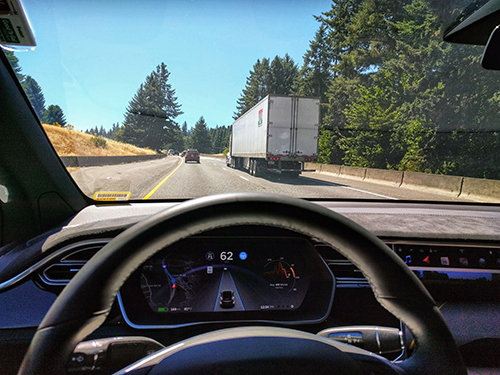 Two new studies released by the Insurance Institute for Highway Safety found that vehicle automation technology “has limitations that can be tricky for drivers to grasp.”

One study revealed how the names manufacturers use for these systems can send the wrong messages to drivers regarding how attentive they should be. Another found that drivers don’t always understand important information communicated by system displays.

“Current levels of automation could potentially improve safety,” IIHS President David Harkey says. “However, unless drivers have a certain amount of knowledge and comprehension, these new features also have the potential to create new risks.”
Despite the limitations of today’s systems, some of their names seem to overpromise when it comes to the degree to which the driver can shift their attention away from the road. One name in particular — Autopilot — signals to drivers that they can turn their thoughts and their eyes elsewhere, an IIHS survey found.

For the survey, more than 2,000 drivers were asked about five Level 2 system names currently on the market. The names were Autopilot (used by Tesla), Traffic Jam Assist (Audi and Acura), Super Cruise (Cadillac), Driving Assistant Plus (BMW) and ProPilot Assist (Nissan). Participants were told the names of the systems but not the vehicle brands associated with them and they were not given any other information about the systems.

Each participant answered questions about two of the systems chosen at random. They were asked whether particular behaviors were safe while using that technology.

If a system name is one of the first ways a driver learns about a feature, another source of information is the instrument cluster. Displays are important because they tell a driver how a system is responding to situations or when a system is temporarily inactive.

The second recent IIHS study looked at whether drivers understand this information from the display of a 2017 Mercedes-Benz E-Class with the Drive Pilot system. The E-Class display is typical of displays from other automakers.

Eighty volunteers viewed videos recorded from the driver’s perspective behind the wheel of the E-Class. Half of the participants first received some training in the form of a brief orientation about the instrument cluster icons pertaining to the two systems.

In the study, certain key pieces of information eluded many of the participants. While almost everyone was able to understand when adaptive cruise control had adjusted the vehicle speed or detected another vehicle ahead, most participants, regardless of whether they received the training, struggled to understand what was happening when the system didn’t detect a vehicle ahead because it was initially beyond the range of detection.

Most of the people who didn’t receive training also struggled to identify when lane centering was inactive. In the training group, many people got that right. However, even in that group, participants often couldn’t explain why the system was temporarily inactive.

“If your Level 2 system fails to detect a vehicle ahead because of a hill or curve, you need to be ready to brake. Likewise, when lane centering does not work because of a lack of lane lines, you need to steer,” says Harkey. “If people aren’t understanding when those lapses occur, manufacturers should find a better way of alerting them.”

Although systems ideally should be intuitive, providing an orientation at the dealership could also help. The study showed that interface-specific training helped drivers notice changes in lane-centering activity and use the correct icons to determine system status.