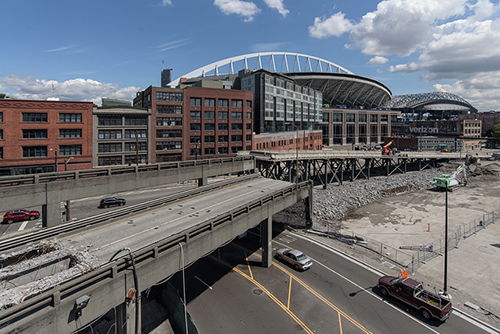 The January closure of the Alaskan Way Viaduct in downtown Seattle – also known as State Route 99 – was another step in a long reclamation project that will eventually remove highway and repurpose the land it occupies.

According to the Washington State Department of Transportation, removing the viaduct will be completed in three stages: site preparation, demolition, and site restoration. The agency noted all of that can be tracked via its viaduct demolition tracker, which is updated weekly.

Once a portion of the viaduct has been demolished, WSDOT said crews must restore the work zone to its former condition. In this case, “restoration” means re-opening streets, sidewalks, and parking that was available before the removal process began, the agency explained.

After crews demolish a section of Seattle’s Alaskan Way Viaduct, they must remove the rubble, restore parking and reopen streets; a three-week process captured in the video below:

The land where the viaduct once stood will not remain static for long. Once the viaduct has been completely removed, the city of Seattle will step in to begin construction of the Waterfront Seattle project.