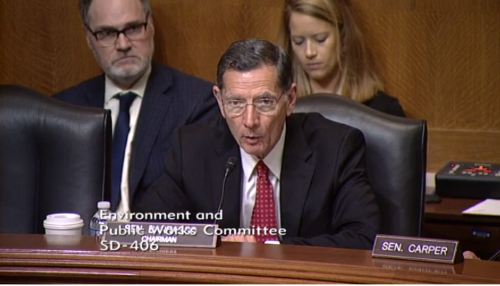 State DOT executives and transportation industry representatives threw their full support behind a bipartisan goal to draft a full five-year reauthorization of the Fixing America’s Surface Transportation or FAST Act based on formula-funding during a July 10 Senate Environment and Public Works committee hearing.

“I am working with ranking member [Sen. Tom] Carper [D-Del.] to advance the most substantial bipartisan highway bill ever passed by Congress,” noted Sen. John Barrasso, R-Wyo., (seen above) the committee’s chairman, during his opening remarks at the hearing.

“We – along with the other members of the committee – are working to pass a five-year highway infrastructure bill to fix our roads, our bridges, and our highways,” he said.

“That means maintaining each state’s share of highway formula funding [as] formula funding gives each state the flexibility they need to address their specific surface transportation needs,” Sen. Barrasso added. “Maintaining the federal highway program’s current approach of distributing over 90 percent of the funds to the states by formula is the key to this. It is a proven approach that works for everyone and should be continued.”

Ranking Member Carper went even farther in his opening remarks at the hearing, describing transportation as key to buttressing the “inalienable rights to life, liberty and the pursuit of happiness” put forth in the Declaration of Independence. “I often link those three inalienable rights with the work we do on this committee,” he said. “The fact is, Americans cannot truly enjoy life, liberty, or the pursuit of happiness without a safe transportation system that nurtures our economy, protects our environment, and enhances our mobility.”

Carlos Braceras, executive director of the Utah Department of Transportation and 2018-2019 president for the American Association of State Highway and Transportation Officials, emphasized that “predictable funding” is an important factor in the reauthorization process.

“The lack of stable, predictable funding from the Highway Trust Fund makes it nearly impossible for state DOTs to plan for large projects that need a reliable flow of funding over multiple years,” he explained in his testimony. “These projects are what connect people, enhance quality of life, and stimulate economic growth in each community where they are built.”

He stressed that the “heart and soul” of the Federal-aid highway program are the formula dollars supporting state and local investment decisions and are key to creating “long-term predictability” where surface transportation funding is concerned.

“The formula-based program framework built the Interstate Highway System and the National Highway System, the backbone of our national network of roads and bridges that drives our national economy,” Braceras said. “This remains the optimal approach to underpin the next surface transportation legislation that will serve all corners of our country – by improving mobility and quality of life in urban, suburban, and rural areas. If we can have long-term predictability, we also get the best value for our investments in transportation projects.”

Yet he noted that more money will be needed to do all of that successfully. “The investment backlog for transportation infrastructure continues to increase – reaching $836 billion for highways and bridges and $122 billion for transit, according to the United States Department of Transportation,” Braceras explained. “And, in order to simply maintain the current Highway Trust Fund spending levels, Congress will need to identify $90 billion in additional revenues to support a five-year [surface transportation reauthorization] bill through 2025; [while] $114 billion would be needed to support a six-year bill through 2026.”

Luke Reiner, in his first Congressional testimony as director and chief executive officer of the Wyoming Department of Transportation, noted that while formula-funding should remain the primary “emphasis” of any surface transportation reauthorization legislation, more attention needs to be paid to rural states in the process.

Yet Reiner added that “funding provisions must reflect that significant Federal investment in highways and transportation in rural states continues to be warranted and benefits the entire nation,” noting that “rural states face major transportation infrastructure funding challenges. We can’t provide these benefits to the nation and ensure a sufficiently connected national system without Federal investment.”

For example, he said that the national per capita average contribution to the highway account of the Highway Trust fund is approximately $117, yet the per capita contribution attributable to rural states is much higher. “In Wyoming it is the highest of the states at $312 annually per capita, [with] North Dakota, South Dakota, and Montana the next highest,” Reiner noted.

And the stakes are high in regards to obtaining the necessary revenue, Utah DOT’s Braceras pointed out.

“We are at an inflection point in transportation history,” he emphasized. “Our proud legacy of achievement is at risk as we face what the future could look like without a revitalized federal surface transportation program: compromised safety, seriously degraded quality of life and environment, and lack of global economic competitiveness.”