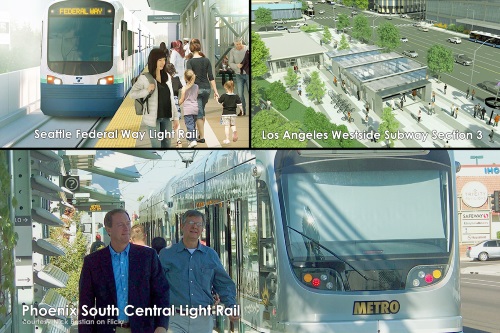 The Federal Transit Administration is allocating $300 million in fiscal year 2019 funding via its Capital Investment Grants or CIG program to rail transit projects in Arizona, California, and Washington, pushing its total of CIG-sponsored projects over the last two years to 25 overall worth approximately $7.63 billion in funding commitments.

The FTA said in a statement on July 9 it is allocating $100 million for each of the following rail transit projects: The South Central Light Rail Extension in Phoenix; the Westside Subway Section 3 Project in Los Angeles; and the Federal Way Light Rail Project South of Seattle.

This follows a $60.76 million CIG agreement FTA finalized with the Dallas Area Rapid Transit on June 27 to help fund construction of its Red and Blue Line Platform Extensions, which will allow DART to accommodate more riders and longer trains.

That $128.74 million project – being built with the help of the Texas Department of Transportation – will lengthen platforms at 28 stations along DART’s existing Red and Blue light rail lines that currently can accommodate only two-car trains. When the project is complete, DART said all stations on those lines will be able to accommodate three-car trains.

That program aims to speed up the construction of fixed guideway capital projects, small starts projects, or core capacity improvement projects established via public-private partnerships – projects where the federal share does not exceed 25 percent of the overall cost.

Williams added in a statement that Congress has appropriated $125 million for FY 2019 to fund this pilot program. It also allows FTA award of up to eight grant agreements under the program, Williams noted, and so far the agency has received expressions of interest from four transit agencies for seven projects.