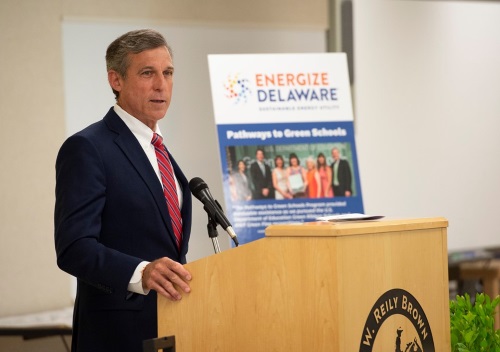 From coast to coast, state governors are signing budgets that increase funding for transportation in a variety of ways.

[Above photo via the Delaware Governor’s Office.]

“We are investing in the future of our state – improving schools for all Delaware children, fixing roads and bridges in every Delaware community, and responsibly managing taxpayer dollars so we’re prepared to keep investing where it matters most,” he said in a statement.

The 2019-2021 budget signed by Wisconsin Governor Tony Evers (D) on July 3 provides a $465 million overall boost in transportation spending, with $320 million going directly to state highway rehabilitation along with $75 million in flexible funding for transportation and transit projects.

“This budget also mirrors my 10 percent increase in general transportation aids, paratransit aid, and the tribal elderly transportation grant program, while also providing an inflationary bump to mass transit aids for the first time in years,” Gov. Evers said in a statement. “We will also invest in our harbors, railroads and air traffic control system, all while keeping bonding at the lowest level in 20 years.”

That 10 percent increase for “general transportation aids” will provide $66 million more funding over the next two years to local Wisconsin governments – money that will flow from the Wisconsin Department of Transportation beginning January 2020.

The Wisconsin DOT noted in a statement that for calendar year 2019, local governments will receive an estimated $473 million from the state transportation fund to build and maintain local roads and bridges.

Governor Phil Murphy (D) signed New Jersey’s FY 2020 Appropriations Act into law on June 30, which includes an additional $150 million in general fund support for NJ Transit, for a total state investment of $457.5 million out of an overall state budget of $38.7 billion.

“The budget enacted today is a victory for working families in New Jersey in many different ways—it supports middle-class priorities, invests in education, makes a record investment in NJ Transit, provides property tax relief, and so much more,” said Gov. Murphy in a statement. “Due to this investment, NJ Transit will not raise commuter fares for the second consecutive year.”

The $90.98 billion FY 2019-2020 budget Governor Ron DeSantis (R) signed on June 21 appropriates $9.7 billion for Florida’s transportation needs, which encompasses $2.7 billion for highway construction – including 125.7 new lane miles to expand roadway system capacity – $1.1 billion for bridge repairs and replacements, along with $40 million for the Tamiami Trail Restoration Project, which will assist with drawing down a $60 million federal grant to fully fund the project.

“When I took office, I wanted to ensure that we would present a bold budget to Floridians that is both aspirational and attainable,” said Gov. DeSantis in a statement. “I am pleased that we have accomplished this goal with … a budget that includes the highest level of per student spending ever, record investments in our Everglades and water resources, and much needed funding for hurricane recovery, mental health, opioid abuse, public safety, and transportation and infrastructure.”

Included in the $700 million is $125 million to construct a 2.7-mile, four-lane connector roadway from the LA 415/Lobdell Highway I-10 exit to LA 1 in West Baton Rouge Parish, along with a bridge over the Gulf Intracoastal Waterway.

“The signing of HB 578 is a win for infrastructure,” said Shawn Wilson, Ph.D., secretary of the Louisiana Department of Transportation and Development, in a statement.

“The transportation needs are crucial throughout the state and impacts our economy and quality of life,” he added. “While this one-time investment is a good down payment, we have so much more we could achieve with sustainable infrastructure investment.”