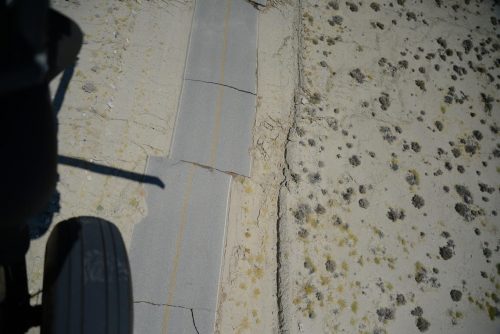 The two earthquakes that struck southern California July 4 and 5 – measuring 6.4 and 7.1 on the Richter scale, respectively – caused at least $1 billion in damages, according to estimates from the U.S. Geological Survey. And that tally includes damages to roads and other transportation infrastructure.

[Above photo from the USGS.]

“We have few big earthquakes and we learn something from each one,” Keith Knudsen, deputy director of the USGS Earthquake Science Center, noted in a statement. “Events like these are an important opportunity to document what happens and could potentially happen in the future.”

State Route 178 traversing the Mojave Desert suffered major damage from the two back-to-back earthquakes, buckling and cracking in several areas. However, as seen in the video below from the California Office of Emergency Services, the California Department of Transportation quickly repaired and fully reopened the road to travelers by July 9.

“The reality of last 48 hours has been extraordinary,” noted California Gov. Gavin Newsom (D) during a news conference on July 6. “Six months ago, we were battling wildfires in northern and southern California. Now we’re facing earthquakes.”

The governor noted that while there is “more resolve than ever to rebuild” in the wake of the damage caused by the two earthquakes, he stressed that it must be done “in an enlightened sense – how can we rebuild to be stronger, better, and more self-reliant; not just more resilient.”