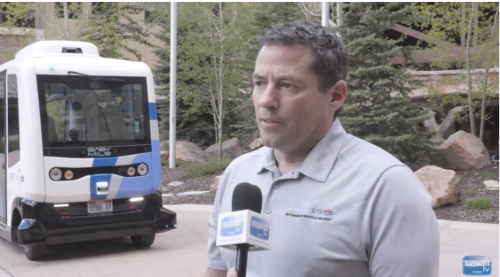 A 12-month joint pilot test of autonomous shuttle buses started in April is but one example of nationwide efforts being undertaken by transportation organizations to foster greater acceptance of autonomous vehicle or AV technology by the general public.

The self-driving, all-electric shuttles being deployed by the Utah Department of Transportation and Utah Transit Authority don’t have a driver’s seat, steering wheel, or a brake pedal, explained Chris Siavrakas (seen above), technology project manager for Utah DOT.

He added in an interview with Transportation TV that one potential use for such driverless shuttles are to connect train and bus commuters to their cars and other transportation modes.

The Utah DOT is one of several agencies actively testing autonomous shuttle buses, including the Rhode Island Department of Transportation and its “Little Roady Shuttle” experimental service launched in May.

Deploying such shuttles, as well as “robo-taxis,” to provide transportation for short trips in urban locales is viewed as key to increasing acceptance of the technology among travelers, according to a study published last year by the World Economic Forum and the Boston Consulting Group.

“These [robo-taxi] offerings become more price-competitive as the trip time shortens,” the study explained. “A shared autonomous taxi at $0.35 per mile is less expensive than a bus ride for trips under six miles – and it provides an experience with guaranteed seating and more convenient start and end locations.”