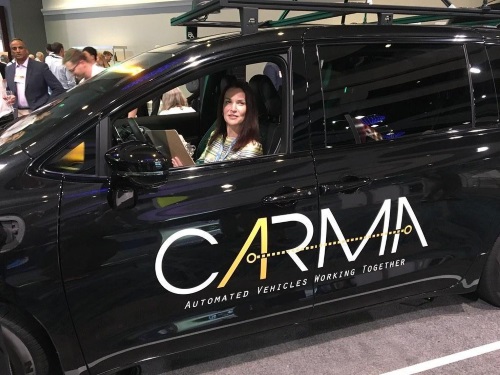 However, she also stressed that reserving the 5.9 GHz wireless communication spectrum for the transportation industry will be critical to making those potential AV benefits become reality.

“[We’re] working to ensure there is enough bandwidth for widespread adoption of new AV technologies [and] the 5.9 GHz band is of critical importance to us in reducing crashes, injuries, fatalities, and overall traffic congestion,” Nason said in her remarks.

“That’s why it’s called ‘The Safety Band’ [because] this small slice of the spectrum is widely used by state and local departments of transportation for vehicle-to-vehicle and pedestrian-collision avoidance,” she explained. “It is also used for transit priority, traffic monitoring and congestion detection, traveler alerts, and snow plow and emergency vehicle traffic signal preemption.”

Nason added that the “Safety Band” is “at the heart of our efforts” to make AV technologies interoperable so they work seamlessly together. That said, however, she stressed that USDOT “is not interested” in promoting one particular technology over another.

“We know consumers will do that for themselves, which is why we want the auto industry, wireless technology companies, and other innovators to keep developing multiple technologies – so long as they can use the ‘Safety Band’ for transportation safety benefits,” she explained.

Other key issues Nason highlighted in her remarks include: