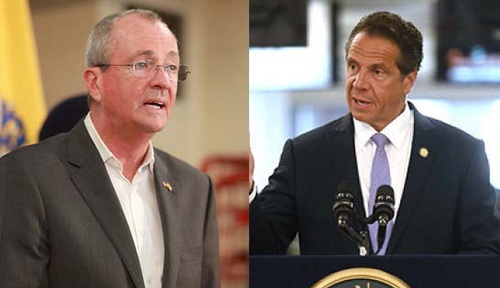 The governors of New York and New Jersey jointly signed bi-state legislation on July 22 to create the Gateway Development Commission, which they described as a “critical step” to getting the long-delayed $30 billion Gateway Project up and running.

“The current Hudson River train tunnels are in dire condition, and it’s only a matter of time before one or both tubes fail,” noted New Jersey Gov. Phil Murphy (D) and New York Gov. Andrew Cuomo (D) in a joint statement – adding that Trump administration has “abdicated its responsibility” for the project by failing to pay its “fair share” to replace this federally-owned asset.

“The legislation makes the Commission eligible to receive federal grants and identifies the funding agreement between the states as a fifty-fifty split of the local share for phase one of the program,” they said. “The bill also expands the board, creates additional transparency and oversight provisions, and identifies the appointment procedures for commissioners.”

Gov. Cuomo suggested the formation of a similar governing body to oversee the Gateway Project in a one-on-one meeting with President Trump last November; forming a corporation made up of three representatives to handle the project – one from New Jersey, one from New York, one from the federal government.

“Let that streamlined corporation manage the entire process, let it go to bid, let’s get the best bids,” he said at the time. “The only estimates we have right now have been prepared by Amtrak because Amtrak owns the tunnel.”

The governor pointed out that since those tunnels are owned by Amtrak, “the federal government should pay 100 percent because the federal government owns them. [And] the president was rightly concerned with the question of how we would do this,” especially as Amtrak has estimated the cost of building new tunnels at $13 billion.