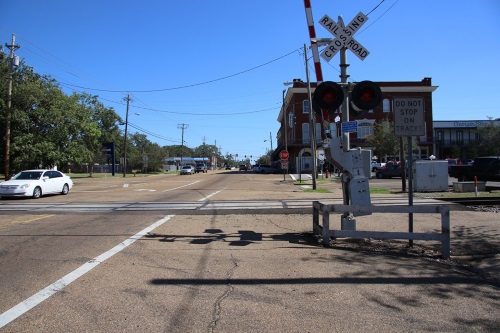 The Mississippi Department of Transportation recently won approval to disburse $10.1 million in funding for intermodal projects throughout the state. At the same time, the agency is stepping up efforts to combat copper electrical wire theft from high-mast and other interstate lighting systems on I-20, I-220 and I-55.

[Above photo by the Mississippi DOT.]

“Mississippi DOT’s responsibilities include maintaining and improving the state’s highways and interstates, but also focuses on providing a safe intermodal transportation network for airports, ports and waterways, railroads and public transit,” said Tom King, a member of the Mississippi Transportation Commission, in a statement. “Each of these modes of transportation play a vital role in transporting people, goods and services that promote economic growth and development throughout Mississippi.”

He added that the money for those multimodal grants comes from the state’s Multimodal Transportation Improvement Fund, which is allocated on an annual basis.

Meanwhile, the Mississippi DOT continues to beef up efforts to stop a rash of thefts over the last several months of copper electrical wire from interstate lights; a dangerous practice for the thieves that not only leaves highway lights inoperable but costs taxpayers more money for their repair and replacement.

Thieves have been stripping copper wire from abandoned houses, commercial buildings, and construction sites for years, according to a report by the Pew Charitable Trusts last year. But they’ve now also targeted at highway lighting systems due to the value of scrap copper, which can be sold for more than $2 a pound.

[In the video below, the California Department of Transportation explained how it works with the California Highway Patrol to stop theft of copper wire from its highway lamps.]

Copper wiring typically is found in boxes at the base of light poles or on highway barriers, and in controller stations — above-ground cabinets off the roadway connected to a whole section of lights. Thieves typically take their “loot” to scrap recycling yards to sell it, Pew noted in its report, and while copper theft ebbs and flows – often depending on the economy and the metal’s price – it never goes away.

The cost to replace that wiring isn’t cheap, either. The Missouri DOT reportedly spent $850,000 on light repairs in 2018 due solely to copper wire theft, according to the Pew report, while the Oklahoma DOT had to spend an estimated $500,000 to repair lights stripped of wiring by thieves along I-40 in Oklahoma City.