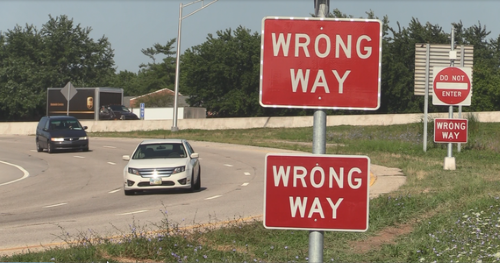 The Ohio Department of Transportation is building the Buckeye state’s very first wrong-way driver detection system along an 18-mile stretch of I-71— a system that includes 92 electronic signs and 82 detection devices at 23 locations.

When the system is activated, light-emitting diode or LED lights around the edge of several “wrong way” and “do not enter” signs begin blinking, while an alert is also sent to the Ohio DOT’s Traffic Management Center in Columbus.

“This section of I-71 was selected using criteria that includes 911 calls, wrong-way and alcohol crashes, the number of alcohol establishments located within close proximity, and ramp traffic volumes,” noted Jack Marchbanks, the agency’s director, in a statement, adding that while wrong way crashes made up only 0.01 percent of all crashes in Ohio last year, they are 40 times more likely to be deadly.

“Not only do these devices add another layer to alert drivers that they’re driving in the wrong direction, they allow us to capture data about where these drivers are trying to enter our highways,” he said.

This, however, is the first time these detection devices have been installed as a system in Ohio, Marchbanks pointed out, as Ohio DOT previously pilot tested two stand-alone devices – one on the exit from westbound I-670 to Neil Avenue in Columbus and the other on the exit from westbound SR-2 to West 28th Street in Cleveland – in preparation for this highway rollout.

The agency noted it is targeting highway ramps in 17 Ohio counties for installation of this technology – along with “additional signage, reflectivity, and striping” – as 82 percent of all the wrong-way crashes in Ohio occurred in them over the last decade.