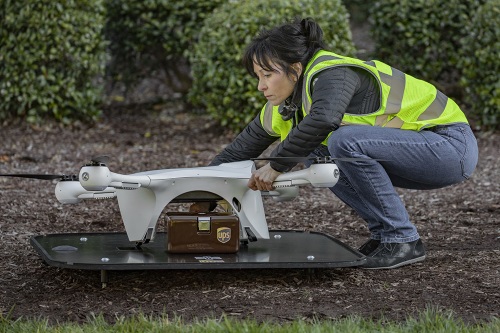 Global delivery company United Parcel Service aims to establish a commercial drone delivery subsidiary and has filed for Part 135 certification from the Federal Aviation Administration so it can conduct flight operations beyond line of sight, at night, and with an unlimited number of drones and operators in command.

The new subsidiary – to be called UPS Flight Forward, Inc. – is an outgrowth of the special drone healthcare deliveries of medical samples UPS began in March this year in partnership with drone maker Matternet under FAA Part 107 certification for WakeMed hospitals in Raleigh, N.C.; a program overseen by the North Carolina Department of Transportation.

David Abney, CEO for UPS, noted that gaining Part 135 certification from the FAA would “pave the way” for the company to expand drone delivery options to other U.S. healthcare networks that have expressed interest in it.

“This is an exciting and momentous time at UPS, as we leverage the exceptional power of UPS technology and innovation to bring to market new industry-first capabilities,” Abney said in a statement.

“We’ve done the testing, we’ve done the prototyping, and now it’s time to make it operational,” explained Bala Ganesh, vice president of the UPS advanced technology group, in news reports, adding that the company’s new drone subsidiary will look to provide other “urgent-need” delivery options, such as sending a drone to a factory requiring replacement parts to fix critical machinery.