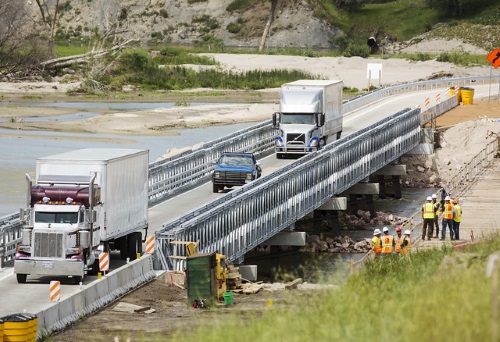 The Nebraska Department of Transportation and Governor Pete Ricketts (R), along with other state and local officials, attended a ceremony on July 29 to mark the re-opening opening of Highway 281, which has been closed since March 13 due to heavy flooding that washed out a bridge spanning the Niobrara River.

[Above photo by Jake Daniels for the Nebraska DOT.]

“The importance of getting the Highway 281 bridge opened back up and reconnecting the communities and people who have felt the effects of its closure can’t be overstated,” said Gov. Ricketts in a statement.

“When bridges and highways are closed, it impacts people’s daily lives and routines tremendously – from getting to work, the store, or a doctor’s appointment or simply just driving up the road to visit family and friends – that’s why it was so important to get this bridge in place and get traffic moving again,” he added.

The Nebraska DOT worked with contractors and subcontractors as part of a nearly $26 million contract to fix damaged sections of roadway and open the temporary bridge while a permanent 1,050-foot bridge over the Niobrara River Channel is constructed.

The agency said that the temporary bridge carries only one-lane traffic controlled by a traffic signal, with a 12-foot-wide width restriction. Motorists with legal loads are permitted to cross the bridge, but no overweight or over dimensional vehicles will be allowed, the Nebraska DOT added.

The agency noted that the permanent Niobrara River replacement bridge should be completed by November 2020, with work on the entire Highway 281 repair project expected to wrap up in the spring of 2021.

“This really was about partnership, patience, and persistence, and we are thankful we had all of that from the community and our industry partners,” said Nebraska DOT District 8 Engineer Mark Kovar in a statement. “It was not easy to get to this day, but we are so pleased to have the road open and have traffic going over the river”