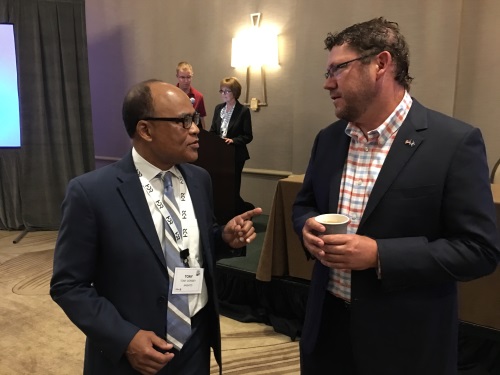 To successfully gain support from both politicians and the general public for increases in transportation funding, state DOTS are relying more and more upon key data illustrating the end-benefits it provides, according to a panel discussion held at the 2019 TransComm meeting being held in Indianapolis.

“If you are trying to make the case for funding, you have to use data to do it,” explained Kyle Schneweis (seen above at right), director of the Nebraska Department of Transportation and chairman of the American Association of State Highway and Transportation Officials Committee on Transportation Communications (known as TransComm), who moderated the panel.

“Data is so critical to what we do as a state DOT, but then we must also transcend borders or gaps between state DOTs and state legislators as well as the general public – that is the end goal,” he added.

“You have to have that data foundation when it comes to the revenue piece for transportation. [Data] also helps you prove that you are efficient with the money you now have,” Schneweis noted. “It has to be about cost-effectiveness and protection and data is what shows why keeping good roads good is far cheaper than letting them go bad and then fixing them.”

And Joe McGuinness, commissioner of the Indiana Department of Transportation, emphasized that connecting transportation investment and outcomes needs to be made all the way down to the local level.

For example, he noted pointed to the implementation of Indiana’s Next Level Roads strategy in mid-2017that has helped spur an incremental increase in extra road funding of between $1.2 billion and $1.3 billion per year, with 40 percent of it shared with local governments.

“Local streets take parents to work, kids to ballgames, and families to the movies,” he said. “Roads move freight and take our kids to school. They are critical to keeping us going.”

Yet Ed Soliday, who chairs the transportation committee within the Indiana House of Representatives, noted that raw numbers alone won’t suffice when it comes to buttressing arguments for increasing transportation funding.

Soliday – an attack helicopter pilot in the Vietnam War who spent 35 years with United Airlines – used flight recorders as an example.

“It’s about data versus information,” he said. “Flight recorders gather data at 2,700 parameters per second. But unless you convert that to information, it is not useful. You need to crunch the numbers; to use performance management information to identify what needs to be fixed first – all based on empirical evidence that can withstand public scrutiny.”

Clint Lamb, mayor of the City of Sullivan, Ind., added that while data is key to making good decisions on what gets fixed first, long-term tangible results need to be visible to the public from transportation investments.

“We need to explain the ‘economic drivers’ behind transportation funding: businesses need customers, and I need taxpayers. We need people, period,” Lamb explained. “So we need to do everything we can to make communities walkable and livable so people come to our downtown and spend money. That is the story of ‘why.’ The streets and the sidewalks are putting customers into businesses, where the dollars they spend are recycled 14 times in my community.”