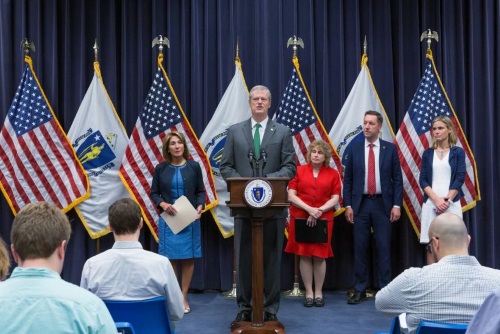 [Above photo via the Massachusetts Governor’s Office.]

This bond bill would also provide the Massachusetts Department of Transportation with the “tools and resources” to advance its goals of having 70 percent of non-interstate pavement in good or excellent condition and having less than 10 percent of the bridge deck area of National Highway System bridges in poor condition.

The governor noted in a statement that his proposed bill includes a “series of initiatives” designed to combat traffic congestion on Massachusetts roadways, including establishing a tax credit to encourage telecommuting and remote working, expanding the use of designated bus lanes and transit signal priority, as well as creating a program designed to reduce bottlenecks on local roadways.

“This bond bill reflects our ongoing commitment to increasing the capability of MassDOT and the MBTA to carry out construction projects to ensure that residents throughout the Commonwealth have access to safe and reliable travel options,” Gov. Baker said. “Millions of people rely on Massachusetts’s roadways and transit systems to get to work every day and we look forward to working with our colleagues in the legislature to pass this transportation bond bill into law.”

The added that “tackling the twin challenges of vehicular congestion and carbon emissions” is at the “heart of this bill.” Thus, in addition to new funding for the MBTA, the bill authorizes $330 million for capital support to the state’s 15 Regional Transit Authorities to invest in fleets and facilities, including electric buses, along with a new $50 million Transit Infrastructure Partnership Program to provide grants enabling transit authorities and municipalities to work together to provide bus lanes, transit signal priority and other infrastructure to keep buses moving.

The bill would also allow MassDOT and the MBTA to follow a “streamlined process” for entering into public-private partnerships and use design-build project delivery for all projects, including those with budgets less than $5 million.