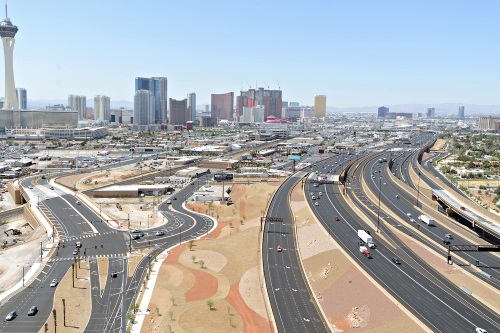 A now-completed $1 billion, four-mile-long widening of Interstate 15 between U.S. Highway 95 and Sahara Avenue in downtown Las Vegas is expected to reduce travel delays and improve air quality from less idle time and vehicle exhaust, according to the Nevada Department of Transportation – improvements the agency called “timely” as traffic through the corridor is expected to double during the next two decades.

The three-plus-year undertaking is the largest, most expensive public works project in Nevada’s 155-year history, the Nevada DOT said in a statement – entailing 63 lane miles of concrete and asphalt paving, with 29 new bridges and 10 miles of drainage improvements.

There are motorist safety benefits, as well, Nevada DOT added, especially from less “merge and weave” traffic – improvements made during the critical third and last phase of Project Neon, which began last April and were completed this year.