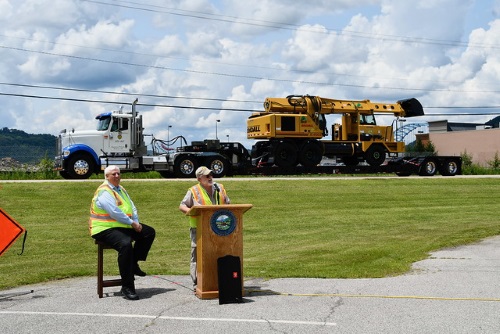 “These roads didn’t get this way overnight,” Gov. Justice said in a statement. “I don’t say this to beat up on anybody, but it’s fact; we neglected things for governorship after governorship and we got ourselves in one whale of a mess. Then, on top of all of that, we sold all of our equipment. And I know good and well that our maintenance crews, no matter how hard they try, they can’t function without the best equipment.”

He added that each of the West Virginia’s Division of Highways 10 districts will receive one of the new Grandall excavators in the coming weeks – machines with sticker prices ranging from $285,000 to more than $485,000 per unit.

“This is a do-all everything machine,” the governor said. “This, absolutely, is a machine that is so badly needed in our counties and our districts across the state, it’s unbelievable.”

Gov. Justice added that, over the last four months since he directed the Division of Highways to make road maintenance its top priority, crews have paved more than 1,000 miles of fresh road and patched more than 7,000 miles-worth of potholes statewide.

In further support of that effort, the West Virginia Department of Transportation officially awarded a $16.9 million contract on July 25 to finish the fifth and final leg of improvements to WV Route 10, which should be completed by summer 2020.

The West Virginia DOT followed that with a $71.7 million contract award on July 26 to double the width of an existing section of Interstate 64 from four lanes to eight lanes – a project expected to begin in the summer 2020 and wrap up in late 2022.

“This widening project along that stretch of I-64 is an important safety project for us,” stated Transportation Secretary Byrd White in a statement. “It will really open that area up and help mitigate the congestion that has been present there for years.”