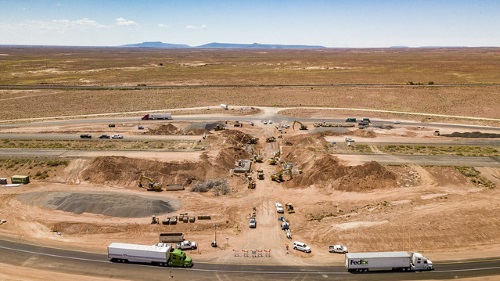 The term is indeed a mouthful – “geosynthetic reinforced soil-integrated bridge system” – but it is a technique new to the Arizona Department of Transportation to not only speed up the replacement of the Interstate 40 bridge at Meteor City Road but to help lower the cost of maintaining it in the future.

According to a statement by the agency, the geosynthetic reinforced soil-integrated bridge system process creates bridge abutments by putting in alternating layers of soil reinforced with synthetic material.

The Arizona DOT added that process will allow it to complete the I-40 bridge replacement project, which began in mid-July, sometime this fall as opposed to a more traditional six-month timeline.

The agency also noted that bridges constructed using this method tend to have lower maintenance costs over their life spans and also fit more seamlessly into the roadway approaches, creating a smoother transition from road to bridge.

The I-40 bridge project is also constructing a new bridge deck using a polyester polymer concrete that can be placed and cured in a matter of days rather than weeks, while providing similar performance in terms of lower maintenance costs when compared to a traditional concrete bridge deck.