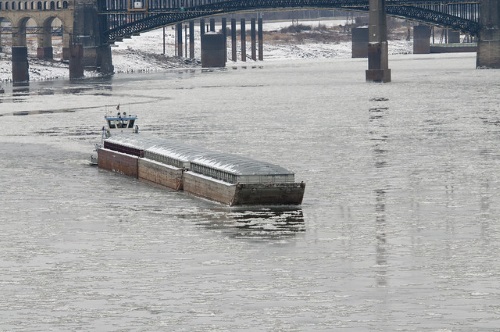 [Above photo by the Missouri Department of Transportation]

MARAD noted that such “designation” makes projects and highway routes eligible to apply for federal funding and that Congress appropriated $7 million for the AMHP in Fiscal Year 2019.

Maritime Administrator Mark Buzby added in a statement that “marine highways” are navigable waterways that can be used as “alternate options” to “traditional” shipping methods – primarily by shifting freight and passenger traffic off of highways.

“Marine highways are an efficient and cost-effective option for moving freight and passengers in America,” he explained.

Buzby pointed out at the American Association of State Highway and Transportation Officials “Washington Briefing” in February that rising freight volumes are creating “significant bottlenecks,” tying up the nation’s road and rail system. By extension, that means other surface transportation avenues for cargo should be encouraged.

“We can relieve stress on highways and railways by using ‘blue highway’ inland waterway system,” he pointed out at that meeting.

To that end, MARAD provided $6.79 million worth of grants to three marine highway projects in New York, Louisiana, and Virginia in April; grants focused on freight transport needs.