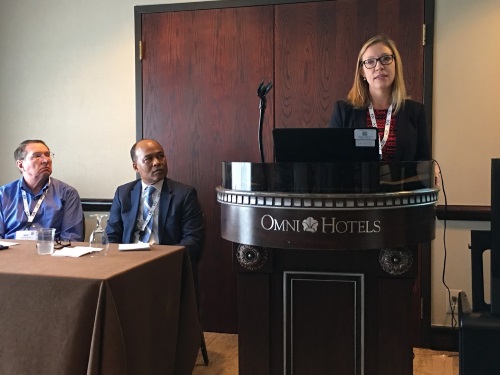 A panel discussion held at the 2019 TransComm meeting in Indianapolis in late July stressed that more public outreach on the part of state departments of transportation regarding snow and ice removal operational needs is critical to creating a safer and more efficient highway system during the winter season.

“Weather impacts travel-time reliability; and we have to focus on this pretty much all of the time,” explained Lisa Miller (seen in photo above at right), traveler information and outreach/growth manager for the Utah Department of Transportation, during the “Winter Woes” session at the annual meeting of American Association of State Highway and Transportation Officials Committee on Transportation Communications, known as TransComm.

She referenced a 2016 case study compiled by the Utah DOT, the National Weather Service, and the University of Utah that found there is “little research” on how people gather information about weather and road conditions and whether and why they decide to alter their driving in stormy conditions.

“With the beautiful scenery in Utah comes weather difficulties – and 80 percent of our population lives on Wasatch front, which gets 30 to 100 inches of snow per year,” Miller explained, adding that the region annually endures dozens of major storms and that her agency spends millions on winter operations.

Rick Nelson, coordinator for AASHTO’s snow and ice cooperative pooled fund program, stressed that there are “two players working in a storm – the state DOT and the customer/motorist using roadway, and they are both using the roads at the same time.”

He added that “people perceive risk differently,” and that can lead to complications without proper outreach. “A winter storm may close schools and the government, but then some people think, ‘hey, I have the day off,’ so they hit the streets to go to the store, to go to the movies, etc.”

That activity directly impacts highway infrastructure and poor weather leads to more vehicle crashes. “A quarter of motor vehicle crashes are due to weather – and a crash prevents snow plows from getting through to clear the roads,” stressed Nelson, who spent more than 30 years with the Nevada Department of Transportation.

The case study cited by Utah DOT’s Miller indicated that across an array of indicators – such as average speed, saturation flow rate, traffic volume, etc. – the reduction in “traffic flow” due to inclement weather ranged from 6 percent to a substantial 50 percent.

Between 2002 and 2012, according to that study’s review of USDOT data, approximately 23 percent of motor vehicle crashes were weather related – translating into yearly weather-linked averages of more than 6,253 people killed, more than 480,000 injured, and almost a million people involved in property-damage-only crashes.

AASHTO’s Nelson noted that a variety of public outreach efforts can help state DOTs “change the mindset” of motorists in terms of driving during severe winter weather.

“The ‘paint the plow’ programs – often part of a pre-winter ‘snow and tell’ programs – help kids understand the importance of snow removal equipment and dangers associated with it,” he said. “Then there are public service announcements – such as ‘Ice & Snow: Take it Slow’ and ‘Don’t Crowd the Plow’ campaigns – that help deal with psychological elements between the motorists operating their vehicles in and around snow plows.”

Nelson added that providing the public with the ability to track snow plow operations – both with location data and cell phone pictures – is the latest way state DOTs are trying heighten awareness among motorists regarding the dangers of winter driving.

John Selmer, director of the strategic performance division for the Iowa Department of Transportation, noted in a separate panel discussion that most of his agency’s ‘track-the-plow’ information gets retweeted by the media in the weather portion of their winter forecast updates.

“We also maintain a ‘winter cost calculator’ to give the public an idea, in real-time, of what it costs to plow the roads,” he said. “That by extension plants the seed for future and more meaningful dialog with the public – for the gathering of more objective data and ways of communicating. It gives them a very detailed understanding of what it takes to fight a winter storm.”