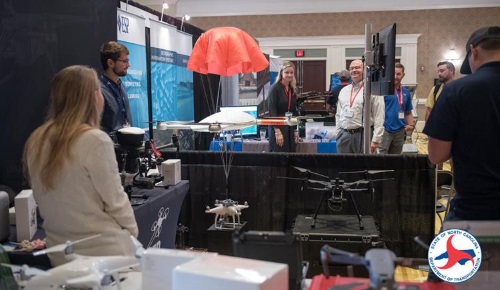 Unmanned Aircraft Systems – known as UAS or drones – took center stage in North Carolina and Kansas this week as the former hosted its second annual global drone summit, while the latter received permission on August 14 to conduct the first ever Beyond Visual Line of Sight or BVLOS drone operation without a requirement for visual observers or ground-based radar support.

The North Carolina Department of Transportation’s division of aviation helped put together the three-day N.C. Drone Summit and Flight Expo in Greensboro this week, hosting more than 500 people from around the world – up from 300 attendees last year – and featuring a full schedule of flight demonstrations, informative talks, panel discussions, and exhibitions.

“Drones are the way of the future, and the NCDOT wants to help businesses, government agencies and others learn how they can use this emerging technology to further their missions,” said N.C. Board of Transportation Chairman Mike Fox in a statement. “This conference is our chance to come together and move the needle toward the future.”

In addition to outdoor flight demonstrations, N.C. Drone Summit organizers this year added indoor technology demonstrations, along with an “UnmannedUp” startup competition to give new drone businesses a chance to showcase their products, meet investors, and compete for a space at next year’s summit.

Also new this year, 50 students from North Carolina middle and high schools got an opportunity to visit the exhibit hall and hear some of the presentations – student outreach efforts similar to those made at the American Association of State Highway and Transportation Officials spring meeting (seen in video below) in Park City, Utah, in March.

Meanwhile, in Kansas the 31-member Kansas UAS Integration Pilot Program or IPP team efforts to advance drone technologies got a boost from the Federal Aviation Administration with a waiver to allow for BVOLS operation without visual observers of ground-based radar support.

The FAA’s approval is the first of its kind for “long line linear infrastructure” and is the “first step” to enable routine commercial infrastructure inspection across the state, noted Bob Brock, Kansas DOT’s director of aviation, in a statement.

“The UAS industry has worked over 10 years to demonstrate the most significant commercial benefit of drone operations within the United States,” he explained. “We are proud of the joint state, university and industry team effort that made this landmark decision possible.”

“The ability to fly BVLOS missions without ground-based radar or visual observers is a significant advancement … [and is] an opportunity to play a key role in shaping the future of UAS operations within the utility industry,” added Mike Kelly, Westar Energy Senior UAS Coordinator. “Being able to operate under this waiver allows the Kansas IPP team the ability to research and develop truly scalable BVLOS UAS operations for the automated inspection of linear infrastructure.”