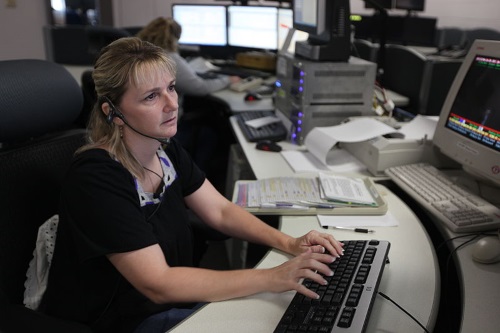 The U.S. Department of Transportation is working with the U.S. Department of Commerce to provide more than $109 million in grants to 34 states and two tribal nations to help upgrade 911 call centers with advanced mapping systems that will make it easier to identify a 911 caller’s location.

[Above photo by the U.S. Marine Corps.]

U.S. Secretary of Transportation Elaine Chao noted in a statement that the Next Generation or NG911 grants are designed to enhance 911 call center systems with “new capabilities such as text message, image and video processing, [plus] advanced mapping and other improvements” as well as speed up response times.

The agency added that NG911 will help 911 call centers manage call overload, as call-takers will be able to transfer calls, messages, and data between public safety answering points that are interconnected to the IP network. The 911 Grant Program also provides funding for training costs directly related to NG911 implementation, it said.

The 911 Grant Program is jointly administered by the Commerce’s National Telecommunications and Information Administration and the National Highway Traffic Safety Administration.

USDOT added that those grants are available to states, territories, tribal nations and the District of Columbia, provided that they successfully submitted a state 911 plan and project budget, designate a 911 coordinator, and certify that they did not use funds designated for 911 systems for other purposes in the past 180 days.

Where the FTA’s most recent round of Ferry Grant Program funds, the money will go to support projects that purchase, replace or rehabilitate passenger ferries, terminals and related infrastructure and equipment.

“America’s waterways are a priceless asset, and the Passenger Ferry Grant Program partners with local communities to leverage those assets to improve mobility for millions of Americans,” noted FTA Acting Administrator K. Jane Williams in a statement.

The agency added that the nine selected projects will receive $30 million in Fiscal Year 2019 funding, along with $2.8 million in FY 2018 funding, for this round of grants.