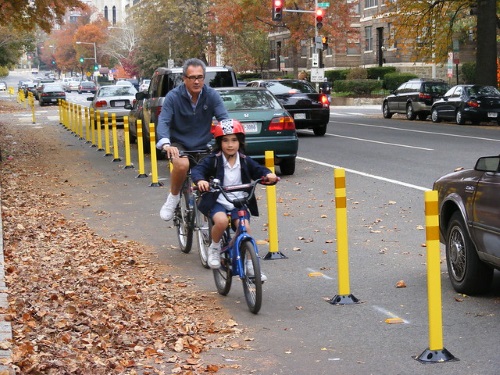 A protected bicycle lane study conducted by the Insurance Institute for Highway Safety finds that while bike lanes separated from the roadway by physical barriers improves safety for riders, the risk of injury varies widely depending on the type of bike lane involved.

The IIHS study – conducted in collaboration with George Washington University, Oregon Health and Science University, and New York University – used what is known as a “case-crossover design” to look at the risks associated with different types of cycling infrastructure, including protected bike lanes.

Some of the study’s findings include:

Jessica Cicchino, IIHS vice president for research and the lead author of the group’s new paper, noted in a statement that this research provides “evidence that protected bike lanes help prevent the worst crashes.” However, she also stressed the IIHS study shows that certain locations are “better than others” for protected bike lane infrastructure.

“Typically, protected lanes are installed on busy roads that pose more of a risk to cyclists in the first place,” Cicchino pointed out. “Our finding that conventional bike lanes were less risky doesn’t mean that cyclists on roads with protected lanes would be better off without that [physical] separation.”

For example, she said intersections and junctions at a two-way bike lane can be particularly challenging for vehicles making turns as drivers need to look for oncoming traffic as they turn, as well as looking in both directions for bicyclists.

“Pedestrians also sometimes enter street-level bike lanes, which can cause cyclists to swerve and fall,” Cicchino noted. “And a cyclist on a protected lane at street level is likely to encounter vehicles at intersections, driveways and alleys more often than on a protected lane enclosed within a bridge or greenway.”