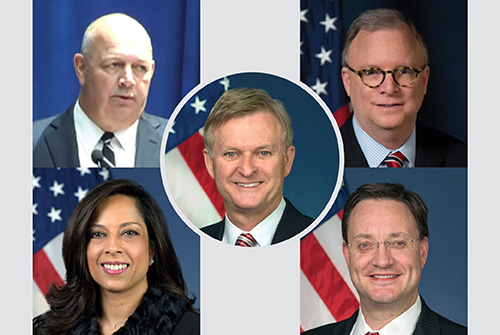 A new administrator has been sworn in at the Federal Aviation Administration, with a new acting deputy secretary announced for the U.S. Department of Transportation and the current chairman of the National Transportation Safety Board re-confirmed to serve a second three-year term.

Stephen Dickson officially became FAA administrator on Aug. 14. Dickson – who most recently served as senior vice president-flight operations for Delta Air Lines and is a former commercial airline and U.S. Air Force fighter pilot – noted during his swearing-in ceremony that the Boeing 737 Max jetliner, currently grounded after two separate crashes earlier this year, will not return active service until he is “100 percent certain” it can safely fly again.

“Safety really is a journey, not a destination – it is a journey we must embark each and every day,” he said. “Our highest and most important value is safety. I want to be clear this plane will not fly in commercial service again until I am completely assured it is safe to do so. The FAA is not following any timeline in terms of returning this plane to service.”

Dickson added in a statement that he is “looking forward to ensuring our aviation system maintains its proper place, leading the world in both safety and operational performance. Nowhere else in the world sees the volume, complexity, and pace of innovation that we have in America. Maintaining the highest levels of safety while adapting to technological advancements will be a key part of our success.”

He’ll have help from a familiar face in doing so as the U.S. Senate reconfirmed the re-appointment of Robert Sumwalt III to serve on the NTSB on Aug. 1, while also confirming the addition of Jennifer Homendy to the NTSB as well.

“Confirming these nominees supports the administration’s initiatives to address critical transportation safety issues and advance technological and scientific discovery,” noted U.S. Sen. Roger Wicker, R-Miss., chairman of the Senate Committee on Commerce, Science, and Transportation, in a statement following his committee’s unanimous support for the Sumwalt and Homendy nominations, among others, prior to the Senate’s adjournment. “I congratulate each of the confirmed nominees and look forward to working with them as they begin their new roles.”

Following those moves, Steven Bradbury is being tapped to serve as acting deputy secretary at USDOT in addition to his current duties as the agency’s general counsel.

A former litigation partner at Dechert LLP in Washington, D.C., where he focused on regulatory enforcement and investigations, rulemaking and judicial review of agency actions, Bradbury spent four years heading up the Office of Legal Counsel at the U.S. Department of Justice, where he advised the executive branch on a wide range of constitutional and statutory questions from 2005 to 2009. President Trump originally nominated Bradbury for the general counsel post at USDOT in June 2017.

Mala Parker, the associate administrator for highway policy and external affairs at the Federal Highway Administration, is being designated by U.S. Transportation Secretary Elaine Chao to also serve as the acting deputy administrator for the agency. She replaces Brandye Hendrickson, who left FHWA to become deputy director of the American Association of State Highway and Transportation Officials on August 5.

“I am honored Secretary Chao has entrusted me with the additional responsibilities of acting deputy administrator of FHWA,” Parker said in a statement. “I look forward to working even more closely with the department’s leadership, my FHWA colleagues, and our stakeholders to build on our efforts to enhance safety and modernize our nation’s roads and bridges.”

Prior to joining FHWA, Parker served as vice president for coalitions at the American Trucking Associations and as associate deputy secretary and as a senior adviser in the Office of Congressional and Intergovernmental Affairs at the U.S. Department of Labor.

Before joining the USDOT, Owens served as an attorney for the Federal Energy Regulatory Commission, where he worked to protect consumers and the integrity of the nation’s energy markets by investigating and bringing civil penalty actions against instances of fraud and market manipulation.