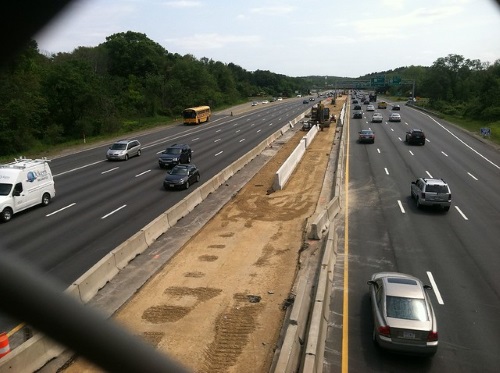 A 172-page report issued by the Massachusetts Department of Transportation on August 8 quantifies levels of traffic congestion being suffered statewide and recommends a series of solutions ranging from transit improvements and more telecommuting to the possibility of establishing “congestion pricing” and managed traffic lanes to mitigate delays.

[Above photo by MassDOT.]

Governor Charlie Baker (R) directed the Massachusetts DOT to compile this report in August last year as part of a “comprehensive analysis” of when, where and why roadway congestion is worsening across the state.

“Traffic and congestion are a nuisance for too many residents, and this report provides our administration with robust data to help us make informed decisions on how to build on our efforts to tackle the Commonwealth’s congestion issues,” the governor said in a statement.

“From this report, we have identified several ways to address congestion by expanding capacity on our transit system, adding more housing, and exploring managed lanes to help make people’s commutes be more reliable,” he noted. “We look forward to working with the Legislature, local government and the private sector to develop solutions to reduce the variability in people’s commutes.”

“We cannot eliminate congestion entirely, but we can better manage it to make trips more reliable and predictable,” added Transportation Secretary and CEO Stephanie Pollack.

“That includes new initiatives as well as a greater emphasis on practices already in use, such as Traffic Management and Systems Operations (TSMO) practices that have been used in Massachusetts for years,” she said. “Moving forward, managing roadways through a TSMO framework must become as much a part of MassDOT’s DNA as fixing potholes and plowing snow. Advancing, expanding, and institutionalizing these kinds of solutions will help limit the effects of crashes, work zones and weather on already lengthy commutes.”

[Those initiatives build on previous efforts undertaken by the Massachusetts DOT, as Pollack explained in an interview with Transportation TV several years ago.]

The agency’s report includes a number of recommendations:

The Massachusetts DOT also committed to “investigating” the “feasibility of implementing ‘managed lanes’” on one or more highways in Greater Boston; establishing a system of parallel lanes on a road, with one or more lanes for drivers that remain free to use while one or more lanes require drivers to pay a fee, which may be constant or vary depending on congestion levels.

Managed lanes could also be used by carpools, buses and vans carrying large amounts of people for no cost, allowing more people to travel in a faster lane with less congestion and no congestion fees, the agency noted.