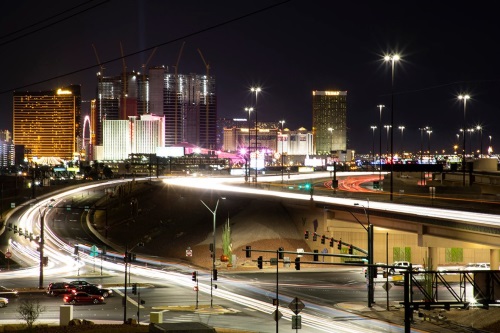 The Nevada Department of Transportation, along with the Federal Highway Administration and the City of Las Vegas, held a celebration of sorts on August 8 to mark the “substantial completion” of a three-year, $1 billion highway retooling effort called Project Neon – the largest and most expensive public works job ever undertaken during the state’s 155-year history.

Project Neon enhanced Interstate 15 between Sahara Avenue and the “Spaghetti Bowl” interchange in downtown Las Vegas; a section that is currently the busiest stretch of highway in all of Nevada as it carries 300,000 vehicles daily, or one-tenth of the state’s population, and witnesses 25,000 lane changes per hour, the agency noted.

Nevada DOT Director Kristina Swallow pointed out in a statement that her agency adopted a design-build approach that helped complete Project NEON nearly a year earlier than originally anticipated, which generated nearly $80 million in “time savings” for local taxpayers.

“This project was a truly collaborative process between stakeholders for improved traffic safety, efficiency and reliability,” she said, adding that traffic volumes through the corridor revamped by Project Neon are expected to nearly double during the next 20 years