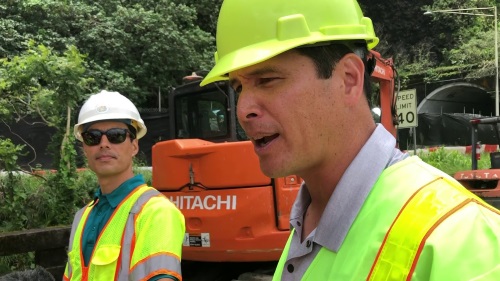 The American Association of State Highway and Transportation Officials appointed Ed Sniffen, deputy director for highways at the Hawaii Department of Transportation (seen above at right), to a two-year term as chair of its Committee on Transportation System Security and Resilience – which will be holding its annual meeting August 27-29 in Jackson, Wyoming.

The mission of the TSSR committee is to coordinate national response efforts, identifies best practices, and fills research gaps to promote resilient and secure transportation systems across the country.

It also provides a forum for members to advance state-of-the-practice and awareness of transportation infrastructure security and resilience through training, technical assistance, and the exchange of information and best practices.

Sniffen and the Hawaii DOT are no strangers to the need for transportation system resiliency, as the agency continually continues with infrastructure damage caused by rain, flooding, landslides, even volcanoes.

Sniffen – re-appointed to serve as the highways division’s deputy director in January this year and who is in charge of overseeing 2,500 lane miles of state highways – previously served executive assistant to Honolulu Mayor Kirk Caldwell. He also served as DOT Highways Division administrator along with a stint as technical design engineer in the highways division design branch.