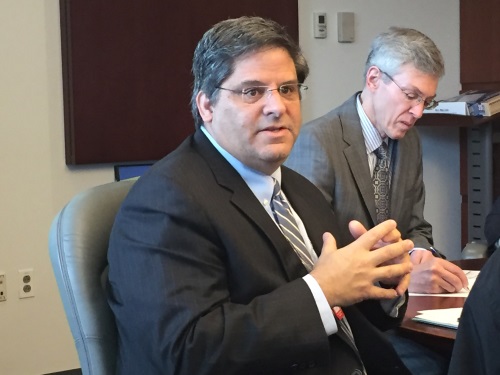 Panos served as the Wyoming DOT director from 2015 to 2019 – a position now filled by retired Major General Luke Reiner – and as director of the Wyoming Department of School Facilities from 2013 to 2015. Prior to that, he served for six years as director for the City and Port of West Sacramento, California, and as construction executive for the state of Washington for five years.

His work experience also includes a stint as a state agency director for the Commonwealth of Massachusetts and special adviser to the chancellor for the California State University System.

Panos – who holds a bachelor’s degree in forensic science from California State University at Long Beach – also worked in the private sector for TRW Inc. for 10 years in its defense and automotive business units. Most recently, he served as county administrator in Lake County, Illinois.

“I appreciate Governor Burgum’s confidence and the opportunity to serve the people of North Dakota,” Panos said in a statement. “In this role, I look forward to improving our infrastructure, the use of innovative technology, and improving our state’s economy through enhanced transportation systems.”

He’ll be responsible for an agency with 982 employees and a biennial budget of $1.4 billion that oversees approximately 8,622 miles of roadway, 1,722 bridges, and serves more than 500,000 licensed drivers at branch offices located throughout North Dakota.

One of the hallmarks of Panos term as the Wyoming DOT director was his focus on connected and autonomous vehicle or CAV issues, with the agency sponsoring CAV demonstration programs on Wyoming’s roads during his tenure alongside testimony given on Capitola Hill to highlight the opportunities and challenges posed by that technology.