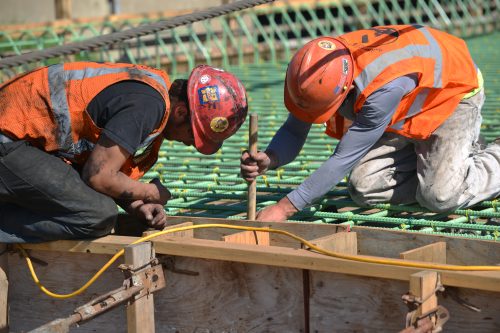 An annual survey conducted by the Associated General Contractors of America and Autodesk finds that 80 percent of the construction firms polled said they are having difficulty filling hourly “craft” positions – with concrete workers, pipe layers, carpenters, cement masons, and equipment operators particularly hard to find – with 73 percent noting it will “continue to be hard or get even harder” to find such hourly workers over the next 12 months.

“Workforce shortages remain one of the single most significant threats to the construction industry,” said Stephen Sandherr, AGC’s chief executive officer (at right in photo at right), during a conference call with reporters on August 27.

Ken Simonson, AGC’s chief economist, explained during the question and answer portion of the call that transportation infrastructure projects specifically may suffer as the construction workforce shortage is pushing up costs and delaying project completion times.

That’s because many AGC member companies are contracted by state departments of transportation to handle the physical construction work entailed by a variety of infrastructure projects, the organization noted.

“Our survey found that 44 percent [of the 2,000 firms polled] report that tight labor conditions are forcing them to put higher prices in their bids, with 29 percent experiencing longer completion times due to this lack of workers,” Simonson said, adding that AGC found that two-thirds of the firms it polled increased base pay rates for craft workers, while 29 percent are providing incentives and bonuses to attract more of them.

[State DOTs are also working more directly with students to highlight the opportunities offered in the construction field. Here’s a look at how the Oregon DOT performs that kind of outreach.]

“This is particularly troubling as it could undermine broader economic growth,” Simonson added. “Demand for new construction could be jeopardized and investment in infrastructure postponed further. And there is no sign of relief as far as these firms can see.”

Yet so far, such construction contractors such as Inland Asphalt Co., Spokane, Washington, are not turning away transportation-related civil engineering projects due to the workforce shortage.

Instead “we are working tremendous amount of overtime – safely, within the regulations – to stay schedule,” noted John Madden, Inland’s general manager, on the call. “However, we are right at that tipping point now where that won’t be enough. We’re very concerned we won’t be able to find enough workers soon to keep up with demand.”

[Jim Tymon, executive director of the American Association of State Highway and Transportation Officials, recently provided an overview of how a similar shortage of workers is affecting the state DOT community in a guest column for a special Workforce Edition of the Eno Transportation Weekly.]

AGC’s survey analysis also found that 45 percent of the companies it polled said the local “pipeline” for preparing well-trained and skilled workers is poor, with 26 percent noting that finding workers who can pass a drug test is poor as well.

However, if there is a “positive outcome” for the ongoing labor shortage, explained Allison Scott, head of integrated marketing, Autodesk Construction Solutions, it is that construction firms are tapping a variety of “innovations” to attain greater efficiencies.

She said that AGC’s survey found that 29 percent of firms are investing in technology to supplement worker duties, with one-fourth of firms using “cutting-edge solutions” such as drones, robots, and 3-D printers, while 23 percent are “taking steps” to improve jobsite performance by relying on lean construction techniques, using tools like Building Information Modeling and doing more off-site prefabrication.

“Regardless of size, it is apparent that technology has become important cornerstone to construction firms; it is enabling new ways of working,” she pointed out during the conference call.

But hardware and software will not solve the workforce shortage alone, Scott stressed, as construction is still a “people-centric” business.

To that end, she said firms are taking on a greater role in developing their own workforce, with 46 percent launching or expanding in-house training programs, while half are getting involved in career building programs.

“Construction workforce shortages are prompting many firms to innovate their way to greater productivity,” Scott explained. “As the cost of labor continues to increase and firms look to become even more efficient, technology can enable better collaboration and ultimately lead to more predictable outcomes.”

She added that “there is also opportunity in untapped pools of talent such as tradeswomen, veterans, and young people looking for an alternative to the traditional four-year university. Either way, we’re reaching an inflection point where the construction workforce is going to look very different in the near future.”