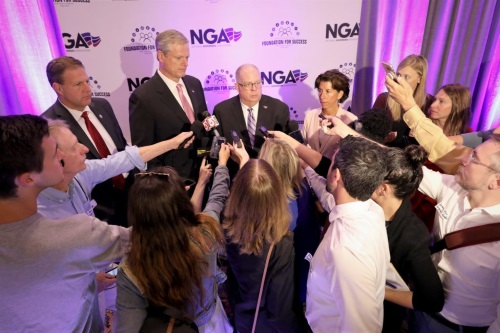 The Boston gathering is one of four such summits being planned for this year and 2020 as part of an initiative Maryland Governor Larry Hogan (R) is spearheading during his one-year tenure as chair of the National Governors Association to “push for the repair, enhancement, and modernization our nation’s infrastructure.”

“In the absence of federal action on sustainable solutions to America’s infrastructure challenges, state and local leaders are working to ensure Americans’ safety and quality of life with modern, well-functioning roads, bridges and other physical assets,” Gov. Baker noted in a statement.

“Continued economic growth has underscored the importance of our ongoing work in Massachusetts to make historic investments in the transportation system to increase capacity and improve reliability, and I look forward to continuing this dialogue and collaboration throughout the region,” he said.

The infrastructure summit occurred alongside a meeting of the NGA’s transportation policy institute and both meetings included representatives from over 22 state departments of transportation from across the nation – including Alaska, Connecticut, Delaware, Hawaii, Missouri, Ohio, and Virginia.

Brandye Hendrickson, the new deputy director for the American Association of State Highway and Transportation Officials, moderated a panel discussion at the NGA’s transportation policy meeting that examined how state DOTs are changing how they “rack and stack” transportation capital projects in order to make more “informed decisions” on the use of taxpayer dollars.

Govs. Baker and Hogan also penned a joint op-ed on August 28 that noted many U.S. cities are facing growing traffic congestion, with “infrastructure shortcoming” dampening the country’s global competitiveness and draining trillions of dollars from the economy.

“Transportation has traditionally been a federal-state-local partnership, but as our nation’s capital has descended into gridlock, so have our underfunded roadway,” they said.

“By 2016, direct federal infrastructure funding fell to less than 0.1 percent of GDP [gross domestic product], while state and local spending neared 1.4 percent. Governors from both parties recognize that until we can secure greater cooperation in Washington, D.C., states must bridge the gap — and we are,” the two governors added.

Those sentiments were echoed by Gov. Raimondo at the meeting. “Reducing traffic congestion and making public transit more accessible and affordable will have a big impact on both our regional economy and our quality of life,” she said. “Bipartisan cooperation among governors is essential to ensuring progress doesn’t stop at our state borders.”

And that need for “cooperation” extends to all levels of government as well, noted Gov. Sununu – federal, state, and local.

“Responsibly developing our regional infrastructure systems requires the participation of all community stakeholders, not just government leaders,” he said. “In New Hampshire, we have returned $36.8 million to cities and towns for them to invest in roads and bridges – a critical step to ensuring that New Hampshire remains a responsible steward of our excellent infrastructure.”