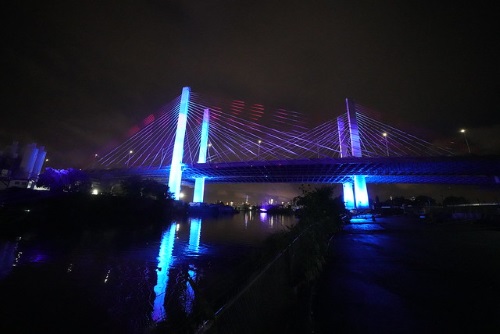 The second and final span of the new Kosciuszko Bridge (seen above) over Newtown Creek in New York City – part of a five-year, $873 million design-build construction project that connects Greenpoint in Brooklyn to Maspeth in Queens – officially opened to traffic on August 29.

Designed to last for the next 100 years, it is the single largest contract ever undertaken by the New York State Department of Transportation.

The first new major bridge crossing constructed in New York City since the Verrazzano Bridge in 1964, the new Kosciuszko Bridge – named after Andrew Thaddeus Bonaventure Kosciuszko, a Polish-Lithuanian military engineer who fought for the Continental Army in the Revolutionary War – replaces a 77-year-old bridge first opened in 1939 under President Roosevelt’s administration, with two cable-stayed structures.

The Queens-bound bridge – opened in April 2017 – carries five lanes of traffic while the newly-opened Brooklyn-bound span features four vehicle lanes as well as a 20-foot-wide bikeway/walkway.

Shoulders have also been added to both bridges, which the former structure didn’t have, while the roadway incline is lower by approximately 35 feet, according to Governor Andrew Cuomo (D), making it easier for trucks and other large vehicles to maintain consistent speeds on the bridge – a design feature that helps reduce traffic congestion.

“[It] was long overdue. The Kosciuszko Bridge was built 80 years ago. It was supposed to handle 10,000 cars [but] it was handling 200,000 cars. It was a chokepoint for years. It obstructed traffic. It was dangerous. So it had to be done,” he explained.

“The new bridge is smart. It has more lanes. They are wider lanes. It is not as steep a bridge so the traffic can move faster,” Gov. Cuomo added. “It is going to reduce traffic 65 percent. That will make the environment better and everything better.”

The bridge project also included a 30,000-square-foot park on the Queens side of the structure, along with a soon-to-be-constructed 7-acre park on the Brooklyn side of the bridge.