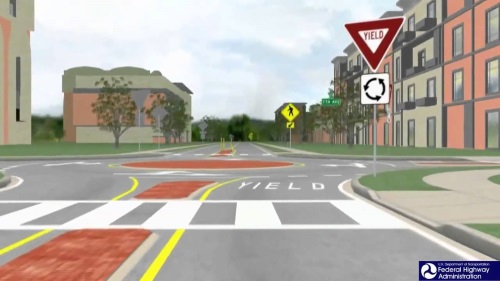 Data analysis recently conducted by the AAA Foundation for Traffic Safety indicates that more than two people are killed every day on U.S. roads by impatient and reckless drivers running red lights. That’s based on the most recent red-light running crash data, which shows 939 people were killed in red light running crashes in 2017 – a 10-year high and a 28 percent increase since 2012, the organization noted.

One infrastructure tactic being touted to help reduce such crashes is the replacement of “signalized intersections” with roundabouts.

In fact, the Federal Highway Administration’s Office of Safety has identified roundabouts as a proven safety countermeasure because of their ability to substantially reduce the types of crashes that result in injury or loss of life not only for motorists but for pedestrians and bicyclists as well – noting that roundabouts reduce the occurrence of “severe crashes” by approximately 80 percent compared to traditional two-way stop-controlled intersections.

To help broaden awareness of the potential safety benefits associated with roundabout intersections, the FHWA is holding is second annual National Roundabouts Week September 16-20 this year.

According to the AAA Foundation’s latest Traffic Safety Culture Index, 85 percent of motorists view red-light running as “very dangerous,” yet nearly one in three said they blew through a red light within the past 30 days when they could have stopped safely.

More than two in five drivers also said they believe it “unlikely” they’d be stopped by police for running a red light.