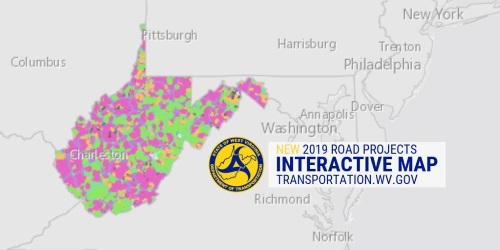 The West Virginia Department of Transportation recently unveiled a new web-based map that displays all road projects currently underway across the state, including ones that are about to be started and ones already completed.

Currently, only 2019 projects are listed but future updates to the map will include additional projects scheduled for 2020 and beyond at a later time, the agency said.

The map, which is being updated every two weeks, also provides real-time statistics on road work project completion status across a variety of categories – including the governor’s Secondary Roads Maintenance initiative and Roads to Prosperity program, according to the West Virginia DOT.

Users of the interactive map are able to search their location by typing in a specific address, the West Virginia DOT said, and can search by city, county, or Division of Highways district to pinpoint any area they would like to observe on the map.

Users can also zoom and drag the map to adjust their view to see roadwork that’s completed, underway, or scheduled for roads nearby, the agency added.

“Under the leadership of Governor [Jim] Justice, we have stated that we were going to provide a way to show the public, in a transparent way, the progress we have made in a short amount of time,” Byrd White, West Virginia’s secretary of transportation, explained in an August 22 statement.

“This interactive website allows everyone who’s interested to see what’s been done and what will be done, before the end of the year,” he said.

“This is an incredible tool for the people of West Virginia to be able to see exactly where our crews will be and when they’ll be there,” added Jimmy Wriston, West Virginia’s deputy secretary of transportation.

“This is going to be the go-to, complete tool for people to use to know when roads in their area will be fixed,” he noted. “And [this map was] done in-house … at a cost-savings of well over a million dollars versus what we would have had to pay for an outside company to produce it. Not to mention we made this map in just a couple of months when an outside company would have likely taken in the neighborhood of a year to 18 months to deliver.”

In Virginia, $211M is the Magic Number for Winter Operations