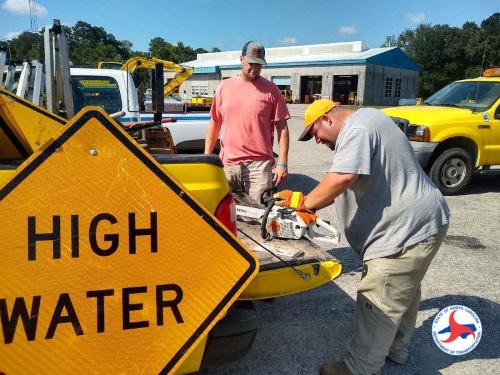 Six state departments of transportation along the east coast of the United States have deployed a variety of resources in conjunction with other local, state, and federal agencies to battle the high winds, heavy rain, and flooding generated by Hurricane Dorian.

Downgraded to a Category 1 storm right before it made landfall on September 6 along the Carolina coastline, Hurricane Dorian packed winds of 90 miles per hour that fueled a coastal storm surge of 10 feet in some areas.

The North Carolina DOT put staff in all 100 counties on high alert starting September 3; readying post-hurricane supplies for road clearing efforts, road repairs, and pipe replacements. The agency added in a statement that 2,415 of its employees across all 14 of its highway divisions were poised for storm response efforts as it shifted resources to the coast and eastern North Carolina where they may be needed most for storm cleanup efforts.

That included readying flight teams and charging batteries for post-storm drone operations, with plans to share in real-time all images and video captured by the airborne devices of flooding and other hurricane-related damage with federal, state and local authorities to help keep the traveling public safe.

[Side note: a similar drone strategy NCDOT activated in response to Hurricane Florence last year is a finalist in the 2019 America’s Transportation Awards competition.]

South Carolina Secretary of Transportation Christy Hall explained in a Facebook post on September 5 that 2,200 agency employees are involved in Hurricane Dorian operations, helping evacuate 441,000 people from flooding-prone areas along the coast.

The hurricane only skirted the coasts of Georgia and Florida, so the state DOTs for both are beginning to wind down their storm emergency operations. The Georgia DOT, for example, reported that as evacuation orders were lifted on September 5, all roads flowing towards coastal Georgia were re-opened to traffic.

However, the agency emphasized in a statement that lifting evacuation orders “is not an invitation to return to potentially impacted areas; the public should continue to heed the governor’s emergency declaration for affected counties and is encouraged to evacuate immediately as storm conditions are expected to continue to deteriorate and evacuation may become difficult or dangerous.”

The Georgia DOT added that it continues to keep 860 personnel on standby – with roughly a third based in coastal Georgia – ready to respond with 1,033 pieces of equipment. The agency is also keeping 11 bridge inspection teams on standby in areas expected to be the most impacted by the hurricane.

Governor Ron DeSantis pointed out in a statement that with Hurricane Dorian largely bypassing Florida, “our state agencies and personnel are focusing on recovery and restoration efforts along the East Coast.”

He also said Florida’s Turnpike Enterprise will resume toll collections on roads that had previously suspended tolls in preparation for Hurricane Dorian, with a “phase-in” approach to allow motorists traveling from the north more time to reach destinations in the south.

The Florida DOT added that it is continuing to inspect and clear bridges along Florida’s coast, with draw bridges back to normal operations in Miami-Dade and Broward counties. Other draw bridges along the state’s east on the storm’s path remain open to normal traffic, the agency added, noting that it will “continue to assist local government with local bridge inspections as needed.”

Meanwhile, the Virginia DOT continued to ramp up its storm emergency operations as Hurricane Dorian is expected to affect coastal and inland regions starting late on September 5 and into September 6.

Governor Ralph Northam (D) declared a state of emergency on September 3 in order to mobilize personnel and resources ahead of the hurricane, which included the Virginia DOT, Virginia State Police, Virginia Department of Health, and Virginia National Guard, among other agencies.

“Hurricane Dorian remains a powerful storm that has already caused loss of life and serious damage in the Bahamas, Florida, and the Carolinas,” the governor said in a statement.

“Tropical storm force winds, storm surge, heavy rains, and flooding from this hurricane will impact much of eastern Virginia overnight and tomorrow,” Gov. Northam pointed out. “Now is the time for all Virginians, especially those in our coastal regions, to finalize their preparations, listen to local emergency managers, and take shelter before the storm reaches our Commonwealth.”

“Crews across the state stand prepared to respond to any unsafe traveling conditions and damage resulting from the storm,” the Virginia governor added in a separate statement. “Coastal and southeastern Virginia is expected to begin feeling impacts of the storm beginning Thursday afternoon [September 5]. Potential impacts from Hurricane Dorian include coastal and inland flooding, storm surge, damaging winds and prolonged power outages.”

The Maryland DOT also put the finishing touches on its storm response efforts should the hurricane cause flooding in the state’s coastal region.

Current forecasts indicate that tropical storm force winds are expected for the lower Eastern Shore of Maryland and St. Mary’s County, as well as adjacent waters.

“With Hurricane Dorian expected to affect the Lower Shore and St. Mary’s County, I have directed state agencies to stand ready to respond and I urge Marylanders to take all appropriate precautions,” said Governor Larry Hogan (R) in a statement. “Please stay tuned to your local news stations and emergency management offices for the latest updates and, most importantly, use common sense.”