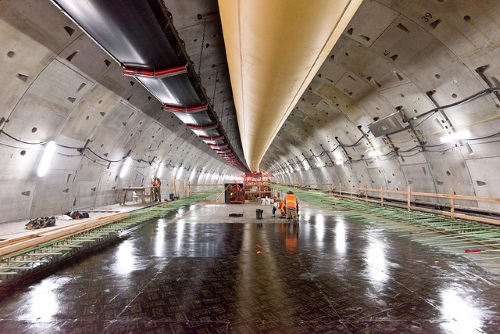 Starting November 9, the Washington State Department of Transportation will begin collecting tolls from motorists to use the two-mile-long State Route 99 tunnel that replaced the double-decker Alaskan Way Viaduct highway; a roadway now in the process of being demolished.

[Side note: Demolishing a major highway in the middle of a major city is a large and challenging undertaking, one of the toughest jobs these seasoned demolition crews have ever experienced. The video below provides a behind-the-scenes look at how the Alaskan Way Viaduct is being torn down.]

The agency said in a statement that state law mandates tolls on the SR 99 tunnel to pay back construction bonds as well as to pay to operate and maintain the structure, which runs underneath downtown Seattle and opened in February this year.

“While the SR 99 tunnel has been a great success, we expect traffic patterns in Seattle will shift when tolling starts,” said Patty Rubstello, WSDOT assistant secretary of urban mobility and access, in a statement. “We are giving as much advanced notice as possible to allow drivers plenty of time to get ready.”

She said motorists are encouraged to open a Good To Go! pass that offers lowest toll rates possible for transiting the SR 99 tunnel – from $1 to $2.25, depending on the time of day. Without such an account, WSDOT said those same tolls will cost $2 more for each trip.