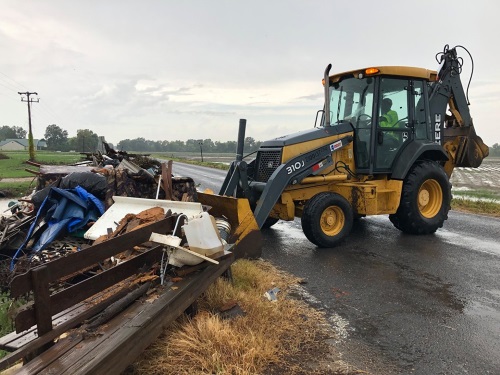 The Federal Highway Administration provided $871.2 million in Emergency Relief or ER funds to help 39 states – as well as American Samoa, Puerto Rico, the U.S. Virgin Islands, the Northern Mariana Islands, and tribal governments – make repairs to roads and bridges damaged by storms, floods, and other unexpected events over the last three years.

[Above photo from the Mississippi DOT.]

FHWA noted in a statement that its ER program reimburses states, territories, federal land management agencies, and tribal governments for eligible expenses associated with damage from natural disasters or other emergency situations – helping pay for the reconstruction or replacement of damaged highways and bridges, along with the arrangement of detours and replacement of guardrails or other damaged safety devices.

[As an aside, the video below compiled by the North Carolina DOT highlights some of the infrastructure damage caused by Hurricane Dorian as it moved up the East Coast.]

This round of ER funding disbursements includes:

This follows ER funding disbursements by the FHWA of $705.7 million in February – with about $153 million paying for repairs to damage caused by Hurricanes Harvey, Irma, and Maria, which all occurred in late 2017.

The agency has also released a further $54.9 million ER funds to help states repair roads and bridges damaged by heavy spring floods – roughly three times higher than the $19.8 million awarded during the same period in 2018.

Other federal agencies are offering disaster aid as well. For example, the Economic Development Administration – a division of the Department of Commerce – published the Fiscal Year 2019 Disaster Supplemental Notice of Funding Opportunity on August 13 making $587 million available to eligible grantees in communities impacted by Presidentially-declared natural disasters in 2018, along with floods and tornadoes in 2019.

The EDA said in a statement that such disaster grants are made by its regional offices under the agency’s Economic Adjustment Assistance program, which enables the agency to make awards that support a wide range of construction and non-construction activities in areas which experience sudden and prolonged severe economic dislocation.