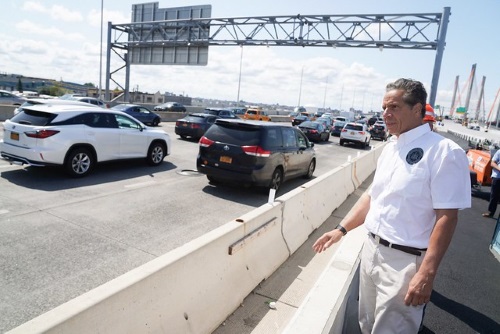 Governor Andrew Cuomo (D) (seen above, touring the newly-opened Kosciuszko Bridge) said during a Labor Day Parade press event on September 7 that he will advance legislation to make the “New York Buy American” Act permanent; a law that requires all structural steel and iron used in all state road and bridge construction projects with contracts worth more than $1 million to be made in America.

Signed into law on December 15, 2017, and implemented on April 1, 2018, New York’s “Buy American” legislation is set to expire in April next year. “At the top of the list [of my priorities] is going to be an initiative to make the Buy American initiative a permanent law in the state of New York,” the governor explained during his remarks, adding that “manufacturing is now five percent of the New York economy and it makes sure that we have the best quality steel, concrete, and iron going into our infrastructure projects.”

The state’s “Buy American” law mandates that the New York State Department of Transportation, Thruway Authority, Bridge Authority, Metropolitan Transportation Authority, Office of General Services, State University of New York (SUNY) Construction Fund and Dormitory Authority of the State of New York, are required to include a contract provision mandating the use American-made structural iron and steel for all surface road and bridge projects.

The law also specifies that such structural iron and steel must be produced or made in whole or substantial part in the United States, with the entire manufacturing process for those items occurring in the United States as well, unless it can be demonstrated that the use of such steel or iron in a particular project should be subject to an exemption.

Governor Cuomo also noted in his remarks that more than $250 billion worth of infrastructure projects are currently underway in New York and “to make sure that these projects last 100 years … you have to know that steel, that concrete, that iron is top quality material; and you only know that if that is made right here in the good old USA.”