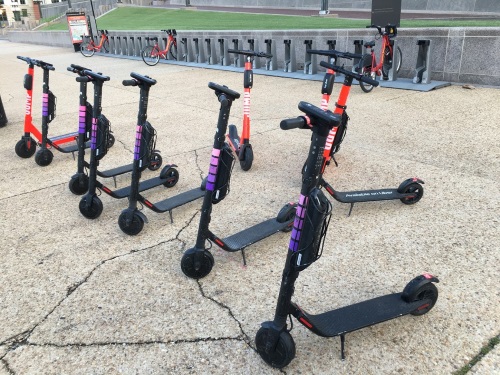 A study conducted by INRIX Research indicates that 48 percent of all car trips in the most congested metropolitan areas across the United States cover less than three miles – representing a “major opportunity” for “micromobility” such as shared bicycle, e-bike, and e-scooter services to reduce traffic congestion and decrease vehicle emissions while boosting “local economies.”

INRIX analyzed more than 50 million car trips in the most congested metro areas and found that 20 percent traveled less than a mile, 16 percent covered one to two miles, and 12 percent traveled two or three miles.

The firm’s report determined that the top three cities with the “greatest profile for micromobility” are: Honolulu, Hawaii; New Orleans, Louisiana; and Nashville, Tennessee.

[State departments of transportation are focusing on a wide range of micromobility needs within their overall transportation plans. For example, in the video below, the District of Columbia DOT is creating curbside parking spaces for bicycles, scooters, and other micromobility modes of transit.]

The company noted that while “automobile-centric sunbelt cities” such as Dallas and Phoenix feature a lower proportion of zero to one-mile car trips (18 percent and 17 percent, respectively) compared to denser locales such as Chicago or New York City (both 22 percent), the “small variation” across all metros indicates the “universal suitability” for micromobility services.

“The ultimate success of these new modes will be predicated on two key steps: cities having a clear understanding of where micromobility is best positioned to offset vehicle travel; and cities having the necessary tools to engage with and manage these services,” the firm said. “Leveraging trip data and insights can provide a foundational view of how people move through a city’s road networks.”

A separate study conducted in Toronto, indicates increased infrastructure support for shifting to “micromobility” travel modes should not impact businesses or consumer spending.

“In 2016, the City of Toronto removed 136 on-street parking spots and installed a pilot bike lane on a stretch of Bloor Street, a downtown retail corridor,” according to that report.

“We found no negative economic impacts associated with the bike lanes: Monthly customer spending and number of customers served by merchants both increased on Bloor Street during the pilot,” it said. “Downtown retail strips may therefore be suited to tolerate bike lanes and even benefit from increased retail activity.”