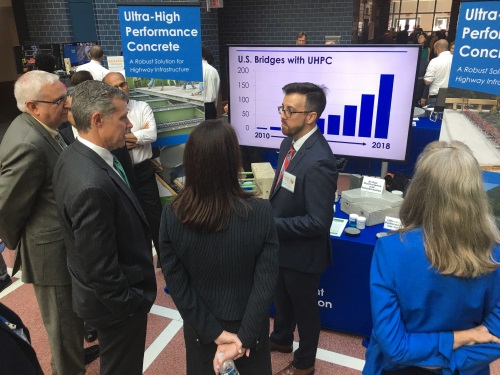 Drones, a virtual reality bicycle simulator, 3-D printers, and new roadway materials, plus a bevy of autonomous vehicle or AV projects formed just some of the highlights of the 2019 Federal Highway Administration Research showcase; a first of its kind event at the U.S. Department of Transportation’s headquarters in Washington, D.C., on September 18.

[Left to right in photo above: FHWA’s Tom Everett, Jim Tymon – executive director of the American Association of State Highway and Transportation Officials – and FHWA Administrator Nicole Nason are briefed at the agency’s research showcase on the advances in Ultra High-Performance Concrete.]

FHWA associates on hand at the showcase said state departments of transportation, construction firms, highway contractors, and other industry stakeholders are the intended user group for those and other innovations displayed at the showcase – the first time FHWA has ever held event of this scale at USDOT headquarters.

For example, the virtual reality bicycle simulator demonstrated at the event is being used by FHWA to develop and test a multimodal alert system that would tap into Dedicated Short Range Communications or DSRC wireless networks to send warnings to bicyclists via smartphones regarding roadway hazards – including work zones, poor roadway conditions, and potential collisions with vehicles.

The agency also highlighted its work with ultra-high performance concrete formulas to provide a stronger and longer-lasting material for bridge construction that could eventually be more cost-effective over the life-cycle of the structure.

FHWA also showed off several drone models it is using to conduct bridge and highway inspections to keep workers out of harm’s way, as well as gather critical data to help speed up infrastructure construction processes.

Those drones – in both airplane and helicopter configurations – are also being used in emergency response situations, to conduct overflights of infrastructure damaged by natural disaster such as hurricanes and floods as a way of reducing risks posed to recovery workers.

USDOT Secretary Elaine Chao noted in a speech at the FHWA event that the agency’s research initiatives – “conducted via partnerships with universities, startups, and industry stakeholders” – help advance transportation innovation.

“This work includes the development of innovations in materials, designs, operations, and safety,” she said. “This has enabled the highway safety system to move people and freight more safely and has contributed to the economic success of our country.”

Nicole Nason, FHWA’s administrator, added that her agency’s autonomous vehicle research has “truly been a multimodal effort” and “only scratches the surface” of what is being deployed to improve the nation’s transportation system.

“Our Cooperative Automotive Research Mobility Application or CARMA program is helping make autonomous vehicles of the future ‘road ready,’” she explained in an interview with the AASHTO Journal at the event.

“It is also important to demystify the technology; people need to see it and understand it. That takes some of the tension and anxiety out of the fear of what is coming,” Nason explained. “It always makes people nervous when there is new technology on the market. So the more events where we can publicly share and show what we are doing – like this one – the greater the confidence of the public and the sooner we can bring the benefits [of autonomous vehicles] to our roads.”

[Jim Tymon, executive director of the American Association of State Highway and Transportation Officials, added in a separate interview that making autonomous vehicles truly “road ready” also means preserving the 5.9 GHz wireless communication channel for their use so they can communicate with one another and the infrastructure around them.]

“What we see happening in the future of transportation has me incredibly excited,” explained Sen. Gary Peters, D-Mich., during the event; one of several members of Congress attending the research showcase.

“Nearly 40,000 die on our highways every year [but] the technology on display here can help eliminate them [those deaths]; that’s a really big deal,” he said. “Technology like self-driving cars will transform our whole society. And it is up to us make sure such changes are positive and that anyone, no matter where live, can take advantage of them.”

Sen. Rob Portman, R-Ohio, added that “it takes push, commitment from the top” to encourage such innovation to occur and that “all the answers are not here in Washington, D.C.; and we thank the Secretary for recognizing that.”

He noted that this new round of ADS funding “makes a huge difference to our state and our country,” emphasizing that rural transportation needs – which will be the focus of the Ohio DOT’s autonomous vehicle research – “are often overlooked by autonomous driving systems” today.

That’s why Rep. Debbie Dingell, D-Mich., stressed that supporting such transportation research is critical to maintaining the economic vitality of the country. “We need to keep working together to keep America at the forefront of transportation innovation,” she added.