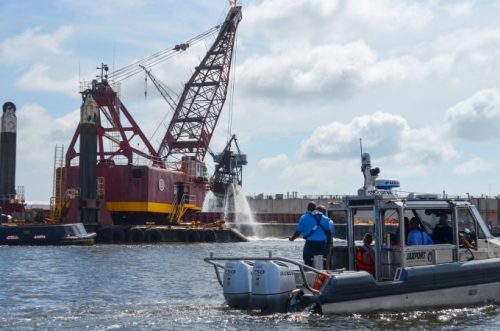 The Florida Department of Transportation awarded additional $35.3 million to the Port of Jacksonville – known as JAXPORT – on September 17 to fund the second phase of the Jacksonville harbor deepening project.

[Above photo by the Florida DOT.]

The state of Florida has contributed nearly $71.5 million so far toward deepening the 13-mile length of the channel connecting JAXPORT’s harbor to the Atlantic Ocean to a depth of 47 feet so it can accommodate larger cargo ships.

“We are extremely grateful that FDOT continues to invest in JAXPORT, furthering our ability to positively impact the economy of our region and state,” said Eric Green, JAXPORT’s CEO, in a statement.

“The support we have from the state of Florida—combined with support at the federal and local levels and a public-private partnership—all ensures JAXPORT will continue to thrive as a global gateway into the Southeast U.S., attracting more jobs and economic opportunity to Northeast Florida,” he noted.

Green added that a recent economic impact study finds that cargo moving through Jacksonville’s seaport generates more than 138,500 jobs across the state of Florida and $31.1 billion in annual economic output for the region and state.

The Jacksonville harbor deepening project is divided into four segments – known as Contracts A, B, C, and D – which make up the full length of the 13-mile federally authorized project. The current funding model covers the project’s first 11 miles, which consists of Contracts A, B and C.

JAXPORT noted that Contract A is scheduled to be complete in spring 2020, with Contract B scheduled to conclude in May 2021. Meanwhile, Contract C – which will deepen an additional 3 miles to Blount Island – is entering the final design phase.