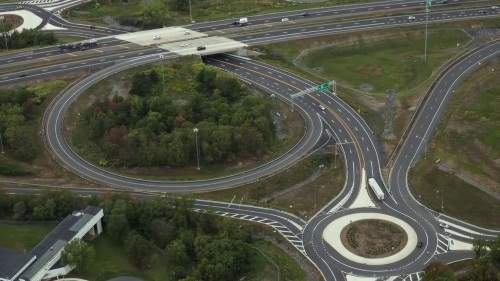 The most recent research conducted by the Pennsylvania Department of Transportation indicates that motor vehicle crashes declined 34 percent overall at 19 roundabout intersections that agency constructed at 16 locations over the last 18 years, with significant drops recorded in both serious and minor injuries, though property-damage only crashes jumped by 10 percent.

PennDOT said it reviewed police-submitted crash reports from 2000 through 2018 at those 19 roundabouts and found that suspected serious injuries dropped by 90 percent, suspected minor injuries fell by 79 percent, and possible/unknown severity Injuries declined 81 percent.

“We are glad to promote the use of roundabouts throughout the commonwealth,” said PennDOT Secretary Leslie Richards in a statement, nothing that 29 other roundabouts have been built on state routes in the last several years, with more than 40 more in the design phase right now.

“The facts speak for themselves; roundabouts save lives and reduce crash severity over standard stop or signal controlled intersections,” she emphasized.

[Because Pennsylvania is on track to install more roundabouts in the coming years, PennDOT created a video three years ago to demonstrate for motorists, bicyclists, pedestrians, and other travelers how to navigate both single and multi-lane.]

To help broaden awareness of the potential safety benefits associated with roundabout intersections, the FHWA held its second annual National Roundabouts Week September 16-20 this year; an intersection design also being touted as a way to curb fatalities and injuries associated with red-light running incidents.